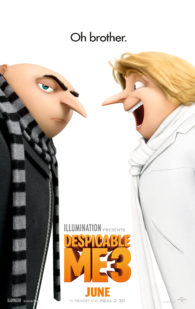 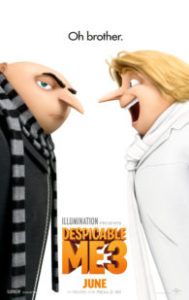 Illumination Entertainment really has a gold mine here with the “Despicable Me” franchise. It literally just prints its own money…but so far after three films and an even better spin-off, they are still great. Pixar’s movies cost near or above $200 million per film and don’t get me wrong they are good, at least they used to be, while Illumination knocks out films like this and “The Secret Lives of Pets” for just $80 million. These are quality films that are very entertaining, pack great voice casts and overall great movies. “Despicable Me 3” is a great addition to the series and is a step up from the second film.

Official Premise: The mischievous Minions hope that Gru will return to a life of crime after the new boss of the Anti-Villain League fires him. Instead, Gru decides to remain retired and travel to Freedonia to meet his long-lost twin brother for the first time. The reunited siblings soon find themselves in an uneasy alliance to take down the elusive Balthazar Bratt, a former 1980s child star who seeks revenge against the world.

Pharrell Williams steps up again and some great new songs for this film. I don’t think he replicated another “Happy” on this soundtrack but very fun music. In addition the film has a flood of 80’s theme of music that is very fun in this film ranging from a-ha to Madonna to Michael Jackson. Trey Parker, co-creator of “South Park” is a new addition to this cast and voices the role of villain Balthazar Bratt, a former child star who’s grown up to become obsessed with the character he played in the 80’s, Evil Bratt. Trey knocks it out of the park and steals the movie, no question. Also we get to meet Gru’s twin brother, Dru and he is another great addition to this sequel.

What I love most about this film is that it is has a nice balance. A nice balance of Gru, Lucy and the girls as well as the a fun backstory for Bratt and of course we get a good amount of those lovable Minions. If Illumination is reading, I am ready for a “Minions 2” BTW for sure next. Just love those guys (or whatever they are). I saw this with my five year old daughter and she simply had a blast. She was laughing throughout and even though some of the 80’s theme was obviously lost on her she enjoyed the balance of the characters and just had a great time watching this film. I really hope that Illumination continues down this trend and continues to deliver great animated films for the whole family!