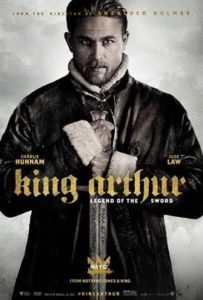 For those who’ve read, studied, or are even fans of Arthurian legend, “King Arthur: Legend of the Sword” isn’t for you. In fact, if you’re well versed in the British folklore, your confusion will quickly turn into anger a couple of minutes into the movie. While I’m not concerned about the mythology-to-book legitimacy of Guy Ritchie’s film, I’m more concerned about the emotional disconnect between its characters and the film’s unrepentant amount of murder.

Arthur (Hunnam), is born into royalty in Camelot, but not raised by his parents. His power hungry uncle, Vortigern (Law), murders his mom and dad, leaving Arthur orphaned and stranded in a boat. He’s picked up by some ladies of the night in Londinium, raised to become a compassionate and strong warrior. Arthur lives life ignorant to his royal and legendary bloodline, but he’s quickly thrust back into the bizarre world that he was born in. A sword in a stone has appeared and there are rumblings amongst the peasants about the return of England’s true king.

Anyone whose familiar with the works of authors like Geoffery of Monmouth and T.H. White, is surely wondering what the hell is going on with their beloved story. Guy Ritchie has pieced together one of the most disjointed and confounding action movies of the year. It’s really difficult to pinpoint blame on this one, but when he’s in the director’s chair and credited as one of the writers, the blame should fall at his feet.

Hunnam, is charming enough, but much of his allure feels forced. Maybe it’s because he’s much better suited as a tragic hero, which he played for six years on “Sons of Anarchy.” Law can’t suit up and play a compelling villain, and his character is inept and underdeveloped. Vortigern spends most of his time making empty threats and talking to an unnamed octopus woman in the dungeon of Camelot. By the way, the live-action Ursula gone-wrong, is just one of many unnamed and unexplained things, places, and people populating Ritchie’s vision. 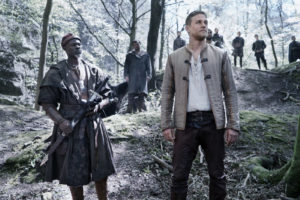 Recognizable names, like Sir Lancelot or Sir Galahad, are on short supply as most run-of-the-mill fans will be struggling to remember or relate with characters like Back Lack or Mischief John. Merlin is mentioned, but the only mage Arthur ever comes into contact with is played by Astrid Berges-Frisbey. She’s never named in the movie, in the credits, or on the movie’s IMDB, yet she’s the only person of magic to interact with Arthur and help him tame his sword. You’d think an integral component of your plot would at least have a nickname.

There are inspired moments of “King Arthur,” but that’s only because of Ritchie’s visual flair and when his signature style is deployed, the use of narration over action sequences to condense exposition in an entertaining manner. The action is mostly digital; including a finale that feels like it was created with the video game engine from “Dark Souls.” It must be noted that this movie is excessively violent as we watch anonymous and unnamed civilians, usually helpless women, slaughtered. It makes the specific Arthur subplot that he lacks motivation to become king and save the day especially confounding.

If you were to take away the legend of King Arthur, as the film’s backdrop, it’s not an especially unique action film. It’s a mish mash of multi-national war dramas, “Lord of the Rings” and slow-motion CGI battles. While there’s rarely a dull moment, that void is filled with plenty of stupid moments. It may find an audience amongst connoisseurs and lovers of bad cinema; much like “Gods of Egypt” did last year.

“King Arthur” is certainly an attempt to kick start a franchise for Warner Bros., who’s still unwilling to admit their regret for hiring Zack Snyder to put together the DC universe. There was potential for “King Arthur” because Ritchie was in the pilot’s seat, but his talents are  overwhelmed by a messy script, bland characters, dimly lit settings, and an over indulgence in summer blockbuster movie tropes. If there’s a sequel, I’ll hope for the best, but expect the worst.