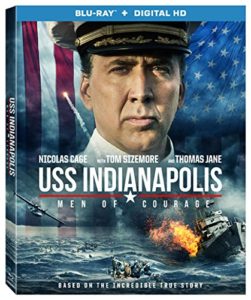 Whenever I think about the story of the USS Indianapolis, I go straight to Quint’s legendary speech from the 1975 film “Jaws”. It is a scary and grim story of courage and strength. Unfortunately, in short, this film neither captures that courage of strength at all and quite bores you with this adaption. There is definitely a cast of character who show up in this film including Nicolas Cage, Matt Lanter, James Remar, Tom Sizemore and Thomas Jane. But no talent can spare us from the slow motion scenes to the cheap CGI.

Official Premise: Based on a true story of survival and bravery, USS Indianapolis: Men of Courage stars Cage as the captain of the USS Indianapolis, a boat tasked with a top-secret mission at the end of World War II. With remarkable production value, the film tells the harrowing tale of real life American heroes shipwrecked in shark infested waters in the waning days of World War II.

The Blu-ray/Digital HD combo pack for “USS Indianapolis: Men of Courage” has no major issue with it’s technical merits. The 1080p does what it can with the film’s cheap production value and use of digital effects. The DTS-HD Master Audio 5.1 surround track works with the action but didn’t overly wow me either. The only special feature included is a featurette focusing around “The Making of USS Indianapolis: Men of Courage”.