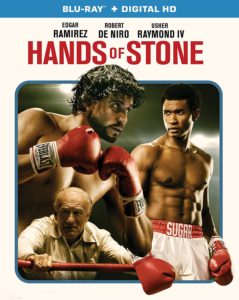 Normally, I am not a huge fan of sports films. Just not my thing, but I decided to check this out due to the talent. Robert De Niro, Edgar Ramírez, Usher Raymond, Ellen Barkin all deliver great performances. I enjoyed the film but it is what I calla a one-timer, I don’t ever see myself revisiting this one and I have a feeling that people are going to forget it as well quite quickly if not already.

Official Premise: Hands of Stone follows the life of Roberto Durán (Edgar Ramírez), the Panamanian fighter who, with the help of his trainer Ray Arcel (Robert De Niro) made his professional debut in 1968 as a 16 year old and retired in 2002 at the age of 50. In June 1980, he defeated Sugar Ray Leonard (Usher Raymond) to capture the WBC welterweight title, but shocked the boxing world by returning to his corner in their November rematch, famously saying the words ‘no más’ (‘no more’).

The “Hands of Stone” Blu-ray comes with a Digital HD copy. The 1080p transfer is sharp and packs as punch as does the DTS-Master Audio 5.1 track, which worked with the boxing. The special features are nothing special either. There is a featurette going behind-the-scenes on the star boxer in “Roberto Durán: A Boxing Legend, a Nation’s Pride”. Other than that, there are only a few deleted scenes, and two lyric videos.