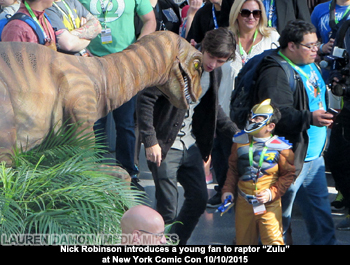 Nick Robinson made the leap from the critically acclaimed indie Kings of Summer (2013) to starring in the number one movie of this past summer, Jurassic World. The smash hit features Robinson playing teenager Zach, one of the nephews of park operations manager Claire (Bryce Dallas Howard). Zach, along with his brother Gray (Ty Simpkins), are left to fend for themselves when Jurassic World is overrun by the escaped Indominus Rex. After a quick visit with promotional raptor “Zulu” on the show floor, Zach sat down with me at this year’s New York Comic Con to discuss making the blockbuster.

Lauren Damon: What were your favorite scenes to film?
Nick Robinson: I think my favorite scene to film–one of my favorite scenes to film just on like a practical side was the moment when we open the doors to the old visitors center. Just because that was so cool to see what they were able to think up…Like all the set decoration was like so specific and it was cool to see 22 years later what kind of damage had ensued in this place. And then also the scene where Gray and I are in the back of the veterinary unit and we have to fight off the raptors. That was really fun to shoot just because I felt like an action hero. The whole thing was shaking and we had to like roll a barrel off and stab ’em. 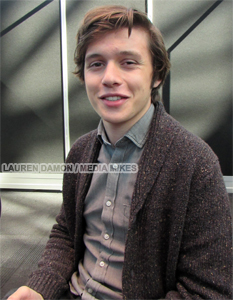 LD: The movie is twenty-two years old and you’re only twenty can you remember the first time you encountered the original?
Robinson: I don’t know if I remember the exact first time that I encountered it but pretty young. I’d probably say–I remember like at least by like seven or eight having seen it a few times and it’s just a great film. Like all of Spielberg’s stuff, Amblin films, it’s just got real timeless qualities and you know as soon you’re getting into it you’re just going to see something good. You know, John Williams knows how to throw some notes together…it’s just a great movie-going experience.

LD: Did you spend a lot of Ty Simpkins when you guys were cast as these brothers?
Robinson: Yes we did. I think it was by design…From the first day we got to set to when the first day we actually shot it was like about a month and so Ty and I got to just hang out just without any pressures of a camera rolling, and we just got to know each other so that helped a lot.

If you could make a hybrid dinosaur, what kinds of animals would you throw in there?
Robinson: That’s a good question. Maybe a pterodactyl and a raptor with some like falcon and tiger thrown in there for good measure. Just make like the deadliest thing of all time.

When the sequel eventually gets made, how do you see your character fitting in?
Robinson: Maybe Zach goes into train under Owen [Chris Pratt’s character] to be a Navy SEAL and then you know he gets trapped in a love triangle [laughs] between someone and someone so we’ll see what happens. Just an idea…it’s brainstorming.

Working with Chris Pratt was there a lot of jokes being pulled? 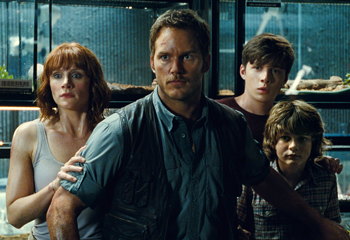 Robinson: Yes. Yes. That man is like a–he’s a machine, he’s got like an improv brain like nobody I’ve ever met before and he’s…It’s just you never know what is gonna happen. And every day it’s just really fun because he makes it that way. He kind of leads by example and so it was yeah, pretty fun.
Any examples you can share?
Robinson: Um…an appropriate example, I mean, he ate a bug one time. For twenty bucks he ate a bug. Yeah.
Who’s twenty bucks?
Robinson: Who’s twenty bucks? Uh, not mine!

Being we’re at Comic Con, are there any superheroes you’d ever like to play?
Robinson:  Maybe Iron-Man just because he’s got a bad ass suit and that would be fun…
Not Star Lord?
Robinson: Well okay I don’t wanna take that–That’s…that’s Chris. But yeah I’d probably say Iron-Man. This is my first time at Comic Con and I’ve seen a lot of the films killing it right now.

Jurassic World is available to own on blu-ray on October 20th.