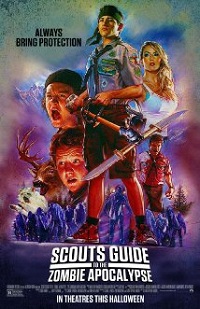 Among the four credited writers for “Scouts Guide to the Zombie Apocalypse”, one must have known what they were doing. One of those writers must have grown up watching movies like “Dead Alive” and “Return of the Living Dead” on late Saturday nights. For every hilarious scene “Scouts Guide to the Zombie Apocalypse” conjures up, there’s at least two or three that don’t even nip at the funny bone.

Ben (Sheridan), Carter (L. Miller), Augie (J. Miller) are the last of a dying bunch, the scouts. Ben and Carter realize that the scouts are the lowest part of the social totem pole at high school. They can’t even get an AV geek to join their ranks. Augie however, lives and dies by the scout code. Ben and Carter are only in it because they’re still friends with Augie and they know it means a lot to him. So Ben and Carter decide to humor Augie for one more overnight in the woods.

Ben and Carter, hoping to salvage their adolescence, plan to sneak out during the overnight and head to a party across town. Meanwhile, an unexplained virus breaks out of a lab, and slowly seeps into town. Within that time frame of our three heroes going out for the night and Ben and Carter sneaking off, the townsfolk are turned into zombies. The build up is expected, but it still takes it sweet time before the carnage starts.

Once the carnage does start though, it seems a bit tame. There are some decent zombie kills, but nothing that hasn’t been done before. As for the jokes, they’re small hits or wide misses. A lot of jokes come too quickly to be enjoyed and those that linger are clearly taken out of someone’s better written script. While “Scouts Guide to the Zombie Apocalypse” is rowdy, it’s not rowdy enough for the full 93 minutes.

“Scouts Guide to the Zombie Apocalypse” may suffer from peak zombie in pop culture. We’ve nearly seen it all and while the title is cool, there’s not much else that we haven’t seen in other movies. For those looking from the bleak pessimism of “The Walking Dead” this weekend, “Scouts Guide to the Zombie Apocalypse” may come as a pleasant surprise. For seasoned horror and zombie fans, it’s disappointing this couldn’t have been more.