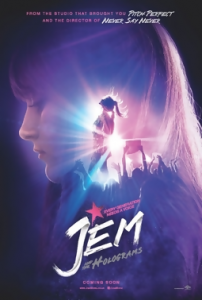 I’m not the target audience for “Jem and the Holograms” and in fact, you may not be the target audience either. If you are under the age of 15, understand things like social media and Youtube, and like poppy rock music, then by all means go see “Jem and the Holograms”; you’ll love it. As for those hoping to relive their Generation X childhood or be reminded of those Saturday morning cartoon watching days in the late 1980’s, you’ll be disappointed.

“Jem and the Holograms” comes from director Jon M. Chu, who’s been stuck directing movies for niche audiences. Chu has two “Step Up” movies and a pair of Justin Bieber flicks under his belt and they aren’t necessarily fodder for the general populous. For those who are the clear target of Chu’s previous movies, they eat it up, but “Jem and the Holograms” is difficult. It seems to be caught between entertaining an audience with feelings of nostalgia and a millennial crowd that doesn’t have nostalgia yet.

Jerrica (Peeples) lives with her sister Kimber (Scott), two cousins and her Aunt Bailey (Molly Ringwald). Jerrica lost her father at a young age and only has fleeting memories left of him. She’s a shy, but talented girl who on a sporadic whim, records herself singing a tune she wrote. She immediately feels embarrassed that she threw on a wig along with thick pink eyeliner, and sang something personal under the moniker, Jem. She quickly asks the tech-savvy Kimber to delete it from their digital camera. Kimber secretly doesn’t.

Realizing Jerrica’s talent, Kimber uploads the video to Youtube. The acoustic, soulful song quickly garners millions of views, likes, and the attention of music industry leader, Erica Raymond (Juliette Lewis). In the digital age where there are no secrets; Raymond sees the marketability of a cultural mystery. Everyone wants to know who “Jem” is and Raymond is ready to market the hell out of that question.

At times, “Jem and the Holograms” is narratively confusing. It fluctuates between glossing over character building and expanding upon unnecessary plots. Honestly, the characters would be a lot more relatable or interesting if we knew more about them. It would also help if we knew the ballpark age of the girls. The quartet has no trouble dropping out of school to pursue a music contract without the consent of an adult or the input of their aunt, if they are in school. Sometimes it makes about as much sense as a Looney Tunes short. It’s one of those movies that you’re better off not applying logic to.

Chu’s direction feels lazy as he incorporates Youtube and Instagram videos to reflect the alleged tone of a scene or the feelings of our characters. There’s also a lot of cringe worthy scenes, including one where Jerrica glances too long at a naked, with nothing but a towel, manager by the name of Rio (Ryan Guzman), that’s in charge of watching the girls. It really becomes unsettling if you begin to wonder how old Jerrica is and how old Rio is since it looks like he wouldn’t be carded when ordering a beer at the bar. Like I said…you’re better off not thinking about it…or seeing this movie.

When “Jem and the Holograms” isn’t stumbling around at an embarrassing pace, there are some genuinely good moments. The music is pretty good considering the musicianship in this movie is a complete facade. Juliette Lewis chews enough scenery that I wondered if she was going to eat the screen. It also helps that it has a decent message about individualism and possibly teaches some of the younger viewers about unflinching acceptance for others who are just simply different. The only problem is that that message comes in by the end and doesn’t ring as loudly as the music.

Overall, “Jem and the Holograms” is a visually unoriginal mess that feels more like an insult to the TV show it’s based off than it does an honest reboot. Despite my trashing, it’s an alright movie for the young ones to see. And I’ll admit that the right eye, the right ideas, and the right director could have made a movie that’s worthy of regenerating interest in a 30 year old TV show. But it appears like the masterminds at Hasbro, who own Jem, realized the best way to cash in on old merchandise is a shiny new package without any fresh content.