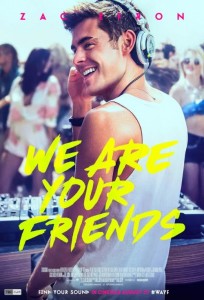 Unlike a lot of my male cohorts, I’m willing to admit I like Zac Efron. I think he’s very talented, but he’s been stuck with fodder that simply wants him shirtless and smiling. But I’ll admit those are two qualities that go hand-in-hand with his likeability and charm that he radiates on screen. Maybe Efron’s charm was just the right amount for me to enjoy the shoddy script that inhabits “We Are Your Friends”.

Cole (Efron) is an aspiring DJ, hoping to break out in the electronic dance music scene. He’s talented, but bogged down by his gang of friends which play like a trashy version of Vincent’s from “Entourage”. Mason (Jonny Weston) acts like his scumbag manager, but only maintaining the scumbag part. As for his other two friends, Squirrel (Alex Shaffer) and Ollie (Shiloh Fernandez), they’re relegated to mop up duty as simplistic drug dealers who are occasionally called upon to shift a subplot in a different direction.

All four have their own personal dreams and goals, aspiring towards a grand life. They all appear to have delusions of grandeur, but it’s never really explained why they feel like they’re life is building towards a life of fame. Cole’s trio of friends are so underdeveloped, you sometimes wonder why Cole would bother clinging to a bunch of lowlifes. The lack of details in Cole’s gang plays in later when the movie asks you to care.

But because Cole is genuinely the only one of the group with talent, he’s the only one that seems to move forward with his aspirations as he catches the attention of an already established DJ, James (Bently). James continues to live off a couple of one hit wonders, simply playing music that caters to his inebriated audience. Seeing the chance to try something new, James becomes a mentor to Cole, but the mentor role is complicated when Cole falls in love with James’ voluptuous live-in assistant/girlfriend/sex doll, Sophie (Ratajkowski).

Most of “We Are Your Friends” is predictable. It times it comes off as cheap when it steals a lot of music biography elements, but when it wants to it manages to handle a few things differently. At a certain point, Cole is told to find his own voice instead of using other people’s music samples in his work. I’m assuming this is advice director Max Joseph was told, but unlike Cole, he can’t follow that advice. Joseph appears to pick out his favorite clichés, weaving them in. Visually though, Joseph has a wonderful style when he wants one. He turns multiple scenes into music videos while adjusting the audio levels to match blasts of music with the adrenaline and the lows of sound with the raw emotion.

The ups and downs, like the music our main characters plays, are tolerable or repulsive, depending on your age. “We Are Your Friends” is definitely a movie catered towards Millennials that appreciate EDM and the scene, much like a Baby Boomer who watches a documentary on Woodstock. So maybe Efron’s charm isn’t what has me recommending “We Are Your Friends”, but maybe it’s because of my age and because I have yet to crest outside its target audience.

One Reply to “Film Review “We Are Your Friends””