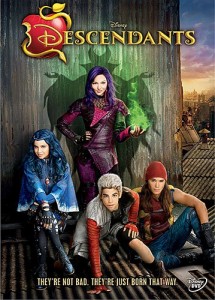 When I heard about Disney making a film focusing on the kids of their most famous villains, I knew that this was going to be a good idea. Top it off with extremely talent actors like Dove Cameron from Disney’s “Liv and Maddie”, Cameron Boyce from Disney’s “Jessie” and Booboo Stewart from “The Twilight Saga” and you’ve got a winner…not to mentioned that you have director and choreographer Kenny Ortega of the “High School Musical” franchise on board. The film is a bit long running near two hours but I enjoyed the talent and music was really run. My daughter has not stopped singing “Evil Like Me” since watching it. Highly recommended for Disney families.

Official Premise: Meet the next generation of villains in Disney’s DESCENDANTS! Imprisoned on the Isle of the Lost, home of the most infamous villains who ever lived, the kids of Maleficent (Kristen Chenoweth), the Evil Queen, Jafar and Cruella De Vil have never ventured off the island… until now. Sent to idyllic Auradon to attend prep school alongside the children of beloved Disney heroes, these villainous kids must execute a plan that helps their evil parents achieve “world domination” once again! Will Maleficent’s daughter (Dove Cameron) and the other rebel teens follow in their rotten parents’ footsteps or will they choose to embrace their innate goodness and save the kingdom?

The special features on the DVD include exclusive dance rehearsal footage and bloopers. The dance numbers in the film are fun and very fun to watch. So it was cool to see some of the work that went into making them. The bloopers were also a blast. My daughter loved watching them…in fact, we watched them a few times actually. Also include with the DVD is a free “Isle of the Lost” bracelet, which my daughter also hasn’t taken off since receiving it and makes sure to have it on during the three times we have watching this film this week. I hope that Disney high tails it with a sequel for next summer because we want more.