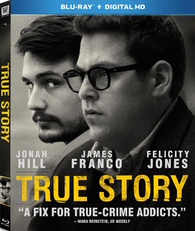 Honestly, have heard much about the film “True Story” but what a cast it boasts with James Franco, Jonah Hill and Felicity Jones. There is some major talent in here. I am shocked this film didn’t get more play time with the cast alone. Props to both Franco and Hill for taking the drama route. They definitely nail it. Worth checking out for performances alone.

Official Premise: After journalist Michael Finkel (Hill) is fired from The New York Times for embellishing a story, he learns that accused murderer Christian Longo (Franco) has been claiming to be him. Hoping this story will save his career, Finkel begins interviewing Longo in prison. But soon, the men find themselves in an eerie game of cat and mouse.

The special features included on this disc are decent, including over 15 minutes of deleted scenes with optional commentary by Rupert Goold. There are four production featurettes looking behind-the-scenes and into the true story of the film. There is an audio commentary with director Rupert Goold, discussing the film and his first time directing. Lastly there is a gallery and trailer included.