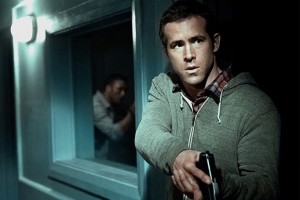 Ryan Reynolds stars this week in Gramercy Pictures’ new sci-fi thriller Self/Less from director Tarsem Singh (The Cell). Self/Less revolves around a dying billionaire named Damian who’s initially played by Sir Ben Kingsley before he undergoes a groundbreaking procedure to place his mind inside a younger, healthier body. Ryan Reynolds’s body to be precise. Secretive underground sci-fi operations generally not being on the up and up, Damian finds himself fighting to find out the origins of this new body while on the run from people behind the shady organization. Assuring us that he was himself and not Sir Ben, the future Deadpool star sat down in New York to discuss the film as well as some other acting aspirations (hint: let’s let the man be evil for a change!)

What attracted you to this film?
Ryan Reynolds: As I’ve gotten older–and I guess I can say that now–I kind of, it’s about working with people you want to work with. And Ben Kingsley had signed on before I was involved. And Tarsem, I remember being so taken with Tarsem’s The Cell. A film which I thought was incredible and of course, Sir Ben and basically everything he’s ever done so…I was just kind of excited to get in the sandbox with those guys.

How familiar are you with the actual research that people are doing regarding this concept?
Reynolds: A little bit, I read some stuff on it–there’s actually some compelling science that would suggest that this is something that we could actually achieve…I find it disturbing, actually. I find the whole concept of it disturbing to so abuse this first life and privilege that we have that we would be as arrogant to ask for a second one. It raises all kinds of questions. For some people it raises a theological argument, for some people it’s just a moral issue, for some people it just sounds awesome. So you know, it just depends. I remember when we were scouting for locations for the movie, we met a couple of billionaires here in New York because we were interested in borrowing their penthouse for Ben Kingsley’s character you know, because he’s a billionaire. And every one of them said “is that possible?” [laughs] You know and you just think ‘wow, you really, you would do that, wouldn’t you?’

Did you meet with Ben Kingsley, since you’re playing the young version of the same character even though you don’t share scenes together?
Reynolds: Yeah I met him. Yeah. I actually spent a lot of time with him. It wasn’t so much that we were shooting together, we had one scene together, but he was around quite a bit. And you know, I would just hang out with him, we had lunch a couple of times. He’s amazing. He’s just an amazing person. I really think he’s kind of like a skin covered nuclear reactor. I mean I’ve never seen a guy with that kind of intensity. He’s got something blowing through him that’s otherworldly.

Lauren Damon: How was it playing against Matthew Goode who’s really playing one of those Archetypal British Villains?
Reynolds: Well, he British. It helps. [laughter] But yeah the Brits are to me, you know, 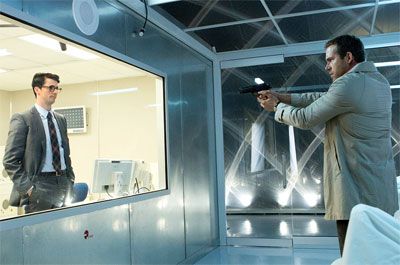 they embody great dry comedy. But certainly there’s a perception that villainous behavior goes in tandem with being British…Yeah, he brought a great screen villain into the mix for us…He is really remarkable. It’s also great because he’s kind of a leading man type of guy and you know, that’s important. I always think–my dream role is to play a villain. I still, to this day, I haven’t had the chance to play like a proper you know, on screen villain. The Voices [2014] I play sort of a nefarious bad guy, but he doesn’t believe he’s a bad guy so I can’t wait to do that some day. Because that’s just, I love villains because villains never ever ever ever feel like villains to me. I would love to do a villain role because I would play every line like he’s the hero. Because in real life that’s what villains are. Villains are just people with opposing convictions, not necessarily people that wake up in the morning and go ‘I need to kill someone.’

Why do you think you’ve not been asked to play a villain?
Reynolds: I don’t know. That’s a good question. I don’t know. I also just think that Hollywood tends to cast villains–they tend to cast people that seem like villains…And I don’t know why they do that. I think like–I would prefer that they take somebody who doesn’t necessarily strike you as a villain and make them the greatest onscreen villain to ever happen. So I don’t know. I would love that opportunity though. I mean I look for them, I always look for them. But typically it’s in the writing–you read them and you’re like ‘oh well he’s written like a villain’ that’s why I don’t want to do it…You know, he’s talking like a ‘bad guy.’ I don’t think villains are like that. I think that villains talk like they’re the hero. You know, if you look back throughout history and you think of some of the greatest, you know, most awful human beings and the people that truly did the most damage, they believed in what they were doing. And that’s why they did the most damage. So like that to me is interesting.

LD: Shooting this and then also being Deadpool, a basically unkillable character, did you find yourself giving more thought to the concept of immortality, whether you saw it as a good or bad thing?
Ryan Reynolds: I don’t know who would want to–to live forever, I feel like that’d just be a sentence. It would be kind of awful. I would not want to, I wouldn’t want to do that. But yeah, as a theme, it’s kind of been around lately for me…I think for a lot of people that’s wish fulfillment and in this film, I think Self/less they kind of tackle it in an interesting way. There’s a real moral argument there. There’s something, it’s a lot to with a class system. There’s a guy who uses his influence, power and money to acquire something that no other human being could really acquire. And to use it in such a way that is not necessarily altruistic but kind of disgusting, that’s the moral journey that he’s on and I think that that is what also derails him. And I found that to be kind of interesting. 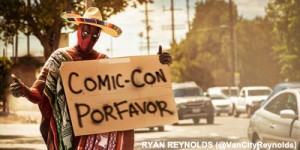 LD: Are you going with Deadpool to Comic Con? And do you think you would brave the show floor whether in disguise or not?
Reynolds: Oh yeah, we will have a presence at Comic Con for sure. Yeah, I’d love to go on the floor…