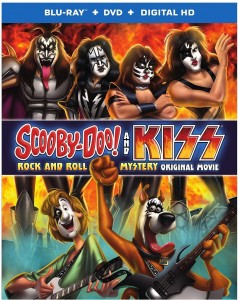 “Scooby-Doo! And KISS: Rock and Roll Mystery” is one hell of an amazing mash up. It takes two of the greatest things I grew up with “Scooby Doo” and the music of Kiss and brings them together. I literally couldn’t be happier. It also features six classic KISS songs and most importantly an all new original song from the band just for this film. If you love “Scooby Doo!” and KISS, this is a match made in heaven! This is such a blast!

Official Premise: When a ghoul begins to terrorize an amusement park, the Mystery Inc. gang come head to head with the legendary rock group, KISS, who claim they’re also there to solve the mystery. Now the two groups must learn to work together as the clues lead them on a cosmic journey to another dimension.

Warner Bros delivers a comob pack with a Blu-ray + DVD + Digital HD Ultraviolet copy. The 1080p transfer is super impressive. The colors are outstanding. The star of the film is easily the DTS-HD Master Audio 5.1 surround track. The KISS classic tracks, including “Shout It Out Loud,” “I Was Made For Loving You,” and “Detroit Rock City”, all sound AMAZING!

The special features though are a little lacking unfortunately. There are two classic 1978 episodes from the “Scooby-Doo” archives, “To Switch a Witch” and “The Diabolical Disc Demon”. “Are You a Scooby or a Shaggy?” is a super brief chat with voice cast including KISS, Kevin Smith and Jason Mewes, and Darius Rucker. Lastly there are some KISS bloopers in “KISS Cut-Ups”. I was really hoping for more features about the involvement of KISS and bringing these two classic pop culture icons together.