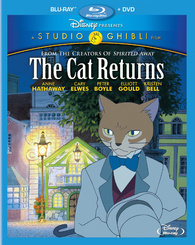 “The Cat Returns” is a 2002 spin-off of the Studio Ghibli film “Whisper of the Heart”, which is one of my favorites.The film featured a fantastic US voice cast including Anne Hathaway, Cary Elwes, Tim Curry, and Elliott Gould. This film followed in the path of “Spirited Away” but didn’t catch on like the Oscar winner. This film is quite magically though and really is very entertaining. I have a feeling that my 3 year old is really going to like this film as well, so I can’t wait to introduce her to this. If you are looking for a sweet fantasy tale, this is a good one.

Official Premise: “The Cat Returns” is a spectacular animated journey to a world of magic and adventure. Haru, a schoolgirl bored by her ordinary routine, saves the life of an unusual cat, and suddenly her world is transformed beyond anything she ever imagined. The Cat King rewards her good deed with a flurry of presents, including a very shocking proposal of marriage to his son! Haru embarks on an unexpected journey to the Kingdom of Cats where her eyes are opened to a whole other world and her destiny is uncertain. To change her fate she’ll need to learn to believe in herself and, in the process, she will learn to appreciate her everyday life.

Disney released this film as a combo pack with a Blu-ray and DVD included. I would have lvoed to see a digital copy but Studio Ghibli films have been yet to be released digitally. The 1080p transfer is solid though and the animation looks fantastic. The colors are crisp and the line detail is well done. There are two audio options, the original Japanese and English dub, both with DTS-HD Master Audio 5.1 surround tracks.

The special features are decent but not amazing though inline with most of the past Ghibli Blu-rays. There are the Original Japanese Storyboards and Original Japanese Trailers included, as well as TV Spots. There is also “The Making of The Cat Returns” looking into the production, a little short. Lastly, there is “Behind The Microphone”, which features the US voice cast discussing about their respective roles.