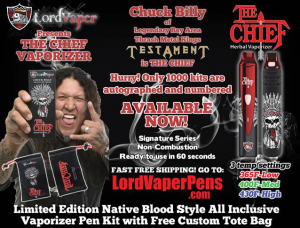 Chuck Billy is probably best known as the vocalist for the legendary bay area thrash metal band Testament. However when not performing with the band around the world Chuck keeps himself busy with several business ventures. His latest is that of his own signature line of vaping pens “The Chief”. Together with Lord Vapor the leading provider of high-quality custom vape pens Billy is set to create a product line just as intense as his music. Media Mikes spoke with Chuck recently about the new product line, his experience with vaping and also touched on the upcoming plans for Testament.

Adam Lawton: What was your first exposure vaping and what was it that you found appealing?
Chuck Billy: I tried vaping years ago when I was in Amsterdam. After I got back I bought my own volcano just like I had seen in Amsterdam. There’s certainly a different feeling that comes with vaping. For me being a singer and trying to keep my lungs healthy vaping always seemed a little easier and I enjoyed that. ==

AL: How did the opportunity to create “The Chief” line of herbal vape pens?
CB: I had talked with Adam from Lord Vapor quite some time ago about doing a product line but it never really got hooked up. About eight months ago we met up and really started talking and working on designs. We had to figure out how to make the product better than it already was and also to have it stand out among the other pens like this. We went in and looked and things like temperature. We found that the hottest current temp wasn’t enough to throw the size of cloud we wanted. We worked with some things and got the temps hotter and also worked with the overall look of the pen. Once we got all that stuff down we ordered the first run of prototypes. It did take awhile but once we got it things worked great. We hit the market in March with the first run of “Big Chiefs” and we are currently working on the second line which will include slim line pens both in rechargeable and disposable models.

AL: What did you find to be the most difficult part of developing this product?
CB: The graphics and the design seemed to take the longest. There was a lot of back and forth between us and the manufactures because we weren’t right there while they were being made. Upping the temperature was certainly the easy part but getting things to look right with not only the pen but also the packaging certainly took some time. You need everything to look correct right out of the box because once you go into production if things aren’t right then everything comes out wrong. It was a bit of a gamble but we learned through the process and we have a really great product.

AL: What do you think has caused the recent rise in vaping?
CB: It’s an option people have to where they can go out in public and not cause a scene from smoking. I have used mine in movie theaters without anyone ever saying a word. One of the days on the recent tour we went out with the Exodus guys and we were all vaping during dinner and having a great time without any problems. Those are definitely some of the advantages over being out and smoking say a pipe or joint. You are a bit more inconspicuous. Also again for me personally it’s less harsh on my lungs than other methods.

AL: Are there plans to increase the line outside of just pens? 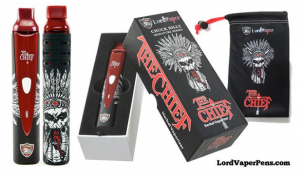 CB: I’m not sure if we are going to try out liquids or not at this point. That is something that I am not really a fan of. We are working on the rechargeable and disposable pens right now and wrapping up sales on the first 1000 signed and numbered special edition Chiefs. Once those are gone we have plans to change the packaging making those first run Chiefs really special. I think this the Chief signature line is something that’s going to keep growing. Adam has opened the door for me on this and within the next year or so I may venture in to a signature accessories line as there are just so many different accessories you can get.

AL: Aside from your vaping products can you give us an update on Testaments current plans for the coming months?
CB: We are pretty busy. We recently wrapped up one tour and will be heading out on another which is overseas in Europe. After that we will be taking three or four months of to finish the writing of the new record. We really want focus on the album and getting it done. Being that we all don’t live near one another these days that can be a little difficult. There’s a lot of emailing and getting together when we can so it takes time. We are very fortunate at this time that our label Nuclear Blast isn’t breathing down our necks to get it done. They don’t do that as they know when it’s ready it’s ready. That’s been the beauty of things as we can make the album right and we are happy with it.