In Reed Morano’s new drama Meadowland, Olivia Wilde stars as school teacher Sarah, the mother of Jesse (Morano’s son, Casey Walker). While on a family trip with Jesse and her husband Phil (played by Luke Wilson), Sarah loses Jesse from a bathroom at a rest stop. Morano and Wilde sat down at this year’s Tribeca Film Festival to discuss the making of the film.

Because the film is largely about Sarah’s journey in coming to terms with her lost son, it begins with the harrowing realization that Jesse is gone.

Lauren Damon: Could you guys talk about filming the opening sequence, both technically and emotionally of the child initially going missing?
Reed Morano: I mean, I think I just wanted to not follow the typical conventions of ‘okay, something bad’s about to happen, this is a thriller’ like I didn’t really want to do any indication of it. And that’s sort of like why you don’t–we don’t really even see Jesse before he goes into the bathroom. And I thought okay…We also didn’t really have very much time.
Olivia Wilde: Yeah.
Reed: I was surprised there. So I was like okay, we’re gonna film, let’s just do it. Let’s just have [the actors] do the whole action and we’re gonna kind of–I’m just gonna follow [them] with the camera. Since we were handheld, it was just very easy to just kind of like go with these guys, move off of them. We kind of had a general–we kind of planned out in general where [they] were gonna go look and then I just kind of went with [Olivia] and then focused on you know, Sarah for a while. And then I focused a little bit on Phil.
Olivia: It was very true to life to, we wanted to show that tragic realism of when something bad happens and if you play it back in your mind, you think ‘What would I have done differently?’ And that guilt that both parents may have felt. That they didn’t spend enough time focusing on him right before he went. You know, they’re in the front seat, Sarah’s working on something, Phil’s driving. And there is Jesse in the back kind of entertaining himself. And that’s why, you know, it’s a scene about real life, real parenting, [a] real family moment where everyone is not necessarily completely 100% focused on each other. And then they go into the rest stop and as we said, you don’t even see [Jesse] because that’s how it would be played back in their minds. Like for me watching it, that’s how Sarah’s remembering her last moments with him…She remembers the cookie, she remembers his little voice, she remembers small moments of looking at Phil. And then once they get to the rest stop, it’s kind of blotchy. She doesn’t really remember. She remembers he’s not there and then he’s gone. And when she goes back in her mind, she thinks ‘Who was there? When’s the last time I touched him?’ You know, all of that that we would all do trying to relive it and think what could I have done differently? So I loved how Reed made that choice just to do this as it would be true to life. Just another day, another moment.
Reed: Yeah because if you lose something, you don’t know ahead of time that’s going to happen…There was this thing at one time where people thought I was going to do this poignant moment in the first scene in the car and I was like no, it should be like real life. Like completely real. We don’t want to indicate–it’s not perfect. It’s just like a regular family hanging out, driving. Some people told us ‘Oh some of this stuff’s a little mundane’ and it’s like but that’s a family driving on a road trip. And then him going into the bathroom–I debated should I show a shot of the bathroom at first? To show, to reveal that the door wasn’t open initially. And then it’s like you’re putting too much pressure, you’re putting too much emphasis on him going into the bathroom. It’s like you’re already–people going into the movie, kind of already know what’s going to happen, but that would really indicate it.

LD: What was the thought process behind casting Reed’s actual son as Jesse?
Reed: Well, I mean there are practical reasons and there are emotional reasons to cast him. And I felt like when I was trying to cast–
Olivia: He was the best one!
Reed: He was the best one. I auditioned a lot of kids and I finally–and I was trying to avoid it–I think we talked about it and it’s like it’s so perfect, not only does Casey look like he could be Luke and Olivia’s son, he is also, he’s not an actor. He’s like really subtle…Like I know him, he’s sort of been my muse for a long time and I take a lot of photos of him. But just knew that he, he’s just wise beyond his years. And I just thought he’s going to be a natural in front of the camera. But besides that, originally I was 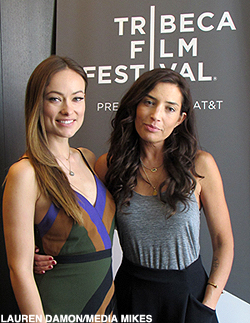 scared of the idea because I was like, that’s so fucked up for me to do that. Am I putting this idea out to the universe and then my own son’s going to go missing? God forbid. And then I thought, no maybe it’s the other way around. Like I’m doing this so that it won’t happen to me. And I also thought it’s such a huge thing to ask of these actors, in particular Olivia, who has just had a son. And I know from experience that right after you have a baby, it’s the most emotional time period. It’s such a weird time for women. That’s why postpartum happens and all these other things. And I just thought I’m asking so much of her and I want to be like in it with her as much as possible and it was sort of like my way…And also, I wanted to make sure I got it right. You know, I feel like I wanted to know–and I don’t know, maybe it would have been better if it wasn’t a kid I was connected to because then I could find a way to make it emotional without having extra baggage attached–but I just, I wanted to really feel what they were feeling. And I felt like that was like the closest way I could do it.
Olivia: I think also in terms of performance, something I loved so much about the opening scene is how natural that moment is. And it’s hard to get a child actor to relax to that point. So I thought we were really lucky to have Casey, who’s not only I think a good actor, but he was so relaxed that we got these real moments that kids don’t typically do when they’re performing.
Reed: And to be noted, pretty much all the dialogue in that scene in the car is ad-libbed by the actors. It’s not–we ended up not really using anything from the script. I think the only thing we used was when he says ‘I’m thirsty’ and Luke says ‘Milk or juice?’ But then Luke added in ‘Or beer?’ and then Casey was like ‘Beer.’ [Laughs] I mean that’s what I mean. He was like SO on it. And then that whole story that Casey tells about ‘I was running…’ that was just me saying ‘Why don’t you tell us some stories about why you like going to see Uncle Tim’ and he’s like ‘Well last time I saw Uncle Tim in Ithaca, we were running around in a field of grass…’ And he just like made that up. The weird part is that later on in the movie, Luke tells a story about seeing Jesse running around in a field of grass behind his house. But that was actually in the script. But Casey had never read the script. So it was this weird like thing that happened. And I had to put it in and my editor was like ‘No no no, it’s too much of a coincidence’ But I’m like when people see the first scene, they don’t know what happens later so it’s fine.

The other child actor in the film is Ty Simpkins as Adam, an autistic student with whom Sarah emotionally connects at her school.

LD: What was the thinking behind having the character of Adam be autistic? And what was it about Adam that would have drawn Sarah in more than her other students?
Olivia: Well he’s an outsider and she relates to that. He has trouble connecting and communicating and she relates to that and so I think that was the reason for it. And I think Reed made the really wise choice, along with Ty, to create Adam to be subtlety different and so that Sarah would be the one to recognize what makes him special. But yeah, that everyone else had just kind of abandoned him and that she in no way sees herself as his proxy mother or him her proxy son, but I think she connects more to him. That he’s her and he’s probably the only one that she wants to be around because he’s not asking her to act normal. And she’s not asking him to act normal.