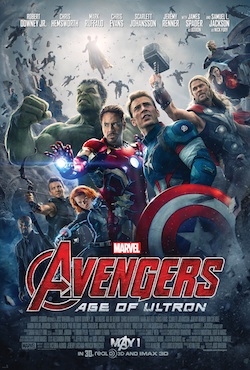 We’re already ten movies into the Marvel Cinematic Universe when we wade into the battlefield with Ultron this first Summer Movie weekend so I think it’s a pretty fair assumption that most people have taken a stance on whether or not they’ll be grabbing a ticket for this latest offering. I know I’m betraying the idea of a critic’s ‘power’ here, but honesty’s the best policy. And honestly, we’re seven years in here and I’m on board despite it not always being the smoothest of rides. That said when it comes to this, the culmination of Marvel’s “phase 2”,  I was a bit overwhelmed. Age of Ultron is more of everything. How could it not be on the heels of its predecessors? There’s more characters, more back stories, and inevitably more destruction.  The former two will always play better than the latter for me but I can’t deny that Whedon’s film is an often wow-inducing spectacle that leaves our heroes on intriguing and unstable grounds.

As we learned from Iron Man 3, Tony Stark (Robert Downey Jr.) is capable of accidentally creating some demons. In that solo story, it just happened to be a slighted science colleague, but in Ultron he really steps up his screwup game. The Avengers have been tracking down the scattered physical remnants of their 2012 outing, Loki’s mind-controlling scepter included. With that ‘glowstick of destiny’ finally in the capable hands of Tony Stark and Bruce Banner (Mark Ruffalo), Stark’s vision of utilizing Artificial Intelligence in his technology to protect the Earth from off-world threats can be realized. But faced with the prospect of the scepter being returned with Thor to Asgard, he does a rushed job of instilling his AI, Ultron, with a peace-at-ALL-costs mentality. And after raiding the internet and all the digital files of humanity, Ultron notices that it’s really the humans who always are in the way of peace. Oops, our evil robot threat is born. When Ultron beams his programming across the globe to the HYDRA facility from whence the scepter came, he picks up two ‘enhanced’ twins (read: evilly experimented on to the point that they’re super. Or as Cobie Smulders’s Agent Hill sums them up, “he’s fast and she’s weird”) in the form of Scarlet Witch 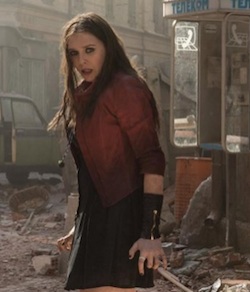 (Elizabeth Olsen) and Quicksilver (Aaron Taylor-Johnson) who have their own axe to grind with Mr. Stark, a former weapons dealer lest we forget.

Ultron himself is menacingly played by James Spader via motion capture that is really chilling, especially in his zombie-like entrance. I hadn’t bought into a CG villain like this since Davy Jones in the Pirates of the Caribbean franchise. As a character born of quip-master Stark, he has a wicked sense of humor that these films always benefit from, even if he’s not as clever or fun to watch as Tom Hiddleston’s Loki. Furthermore, it’s always a risk with comic book franchises to load their sequels with new characters but for me the twins were completely welcome additions. Olsen is particularly compelling as Scarlet Witch, whose powers to access the minds and darkest fears of her opponents induce some emotional, trippy visions for our core heroes. Later we’re introduced to the sublime Vision (played by Paul Bettany, on screen in the flesh, finally! Rejoice!) whose amazing origins are a bit too spoilery to divulge here but he is really a marvel (sorry) to behold. His introduction is one of the quietest sequences and winds up being the most entrancing. I suspect he, more than Ultron, will be what gets the most people talking in the category of new characters.

What’s interesting about Ultron as the chief villain is the gray area he thrusts the Avengers into. It’s all well and good when a mysterious army descends upon New York to be defended by the group, but when they are the creator of the threat, the onus to protect civilians is that much greater. Thus for better or worse, much of our battle sequence time is dedicated to getting the innocent populous out of range. A novel concern for a blockbuster really, though one wonders how much care they receive from the Stark Relief Fund in the aftermath what with their country destroyed…This responsibility is what causes the most strife amongst our original team. With the next Captain America film being Civil War—a comic book conflict that saw Cap and Stark fighting over a government registration of the super powered— it’s really exciting to see that seed of disagreement take root, even 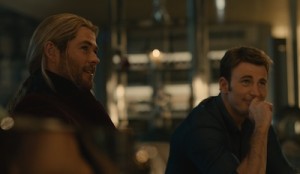 coming to blows in a way they hadn’t since Thor was still a stranger to humans.

As you may have guessed with all my talk of hero in-fighting and quiet sequences being the best, I truly believe that the real power in these films ultimately comes from the scenes where things aren’t exploding. These actors have lived in these characters for years now and Whedon wisely gives them a couple extended sequences in which they just get to be human for a while. Of course they would all try and lift Thor’s hammer (side note: Thor in a red sports coat? Four for you wardrobe department), and hey, maybe some of them even have a family life, how crazy. There’s especially touching exchanges between Ruffalo’s Banner and Scarlett Johansson’s Natasha Romanov, both damaged in their own ways, that remind you just what an amazing caliber of actors this cast contains. Not to mention it’s especially pertinent to highlight their humanity in the face of legions of evil robots. I came away wishing for more of this in fact, since as far as I counted the film had four major city-leveling sequences to the first film’s two. Still, the destruction-fatigue continues to be offset by the cleverness embedded in the action—Cap’s shield certainly is a team player, even if that Hammer isn’t—and the cool new players in the field.