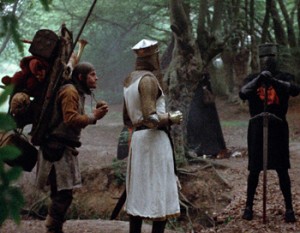 Iconic British comedy group Monty Python reunited at New York’s Beacon Theater on April 24th to celebrate the 40th Anniversary of their film Monty Python and the Holy Grail. The showing was part of a celebration of all things Python, including screenings of Life of Brian, The Meaning of Life and the new documentary The Meaning of Live at this year’s Tribeca Film Festival. Beacon Theater attendees were treated to a showing of the classic comedy and a post show discussion between group members Terry Jones, Terry Gilliam, Michael Palin, John Cleese and Eric Idle with moderator John Oliver. Along with the Pythons themselves, other famous audience members that came out for the group included original Broadway Spamalot cast member Hank Azaria, comedian Rachel Harris and A Fish Called Wanda co-star Kevin Kline.

On the carpet outside the theater, I got the chance to speak with the always-animated director, Terry Gilliam who braved the crowded carpet to share his tongue in cheek thoughts on his co-conspirators, New York audiences and comedy at large. 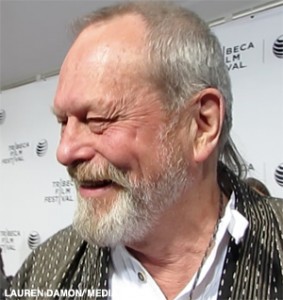 Terry Gilliam: Hello this is a nice quiet part of the carpet.
Lauren Damon: How are you doing?
Gilliam: I’m doing fine, it’s nice down here. They’re all [the assorted Pythons] just making fools of themselves. It’s awful when you’re past seventy and they’re just desperate for any attention!
LD: How does it feel to be here with the film in this festival?
Gilliam: Well. It feels like I’m here for the festival. That’s what it feels like, nothing more, nothing less!
LD: When you were making the film back then–
Gilliam: Yeah we knew we were gonna be here. We knew we were gonna be here 40 years on. Every day we were shooting we said ‘I CAN’T WAIT! Forty years from now, we’ll be at the Tribeca Film Festival! C’mon boys, action! Cut! Action! Cut!’ We’re ready to go. And here we are. We were right.

LD: Having debuted Spamalot here [Eric Idle’s smash 2005 Broadway musical based on the film]–
Gilliam: Spamalot? Horrible! It was a terrible thing! Eric did that, he ripped us off. He ripped us off and he’s made a fortune on our hard work. Yeah.
LD: But it capitalized on a whole New York audience that you’re back with tonight.
Gilliam: I love taking advantage of New York audiences. They’re fantastic. They’re too rich. They’re too smart. They MUST be taken advantage of!

LD: How did working in Monty Python 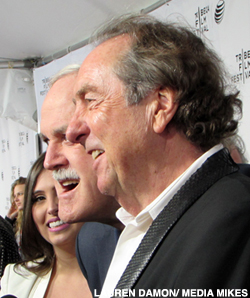 help you with your directing career?
Gilliam: Well it taught me never to work with the other Pythons. That was the most important thing to my career. Because they’d been obviously holding me back for all those years Python was alive. And luckily once I got away from them, my career shot. Pew!

LD: Do you think comics are too nervous about offending people these days?
Gilliam: Offense is a very important part of life. And people who are afraid to offend obviously aren’t saying what they really think. I think people have got to learn to develop thicker skin and start learning to laugh again. That’s what’s so funny. People are frightened of saying what they think anymore and offense is crucial. People gotta just learn to live with it–“Sticks and stones may break my bones but words will never hurt me…It a dangerous business, comedy. Just because there’s lunatics out there, you shouldn’t change the way you think about life. I mean the fact that there are more religious lunatics out there than there were when we did “Life of Brian” is not my fault! [laughs]

LD: If you had to cast a “Holy Grail” or “Life of Brian” with today’s comedy stars, who would you choose?
Gilliam: Oh, I don’t even know what’s going in the world anymore. I’m in my own little world, I’m a hermit now. I live at the bottom of the garden and I’ve got a nice little place. I only am allowed out every ten years like this! [laughs]