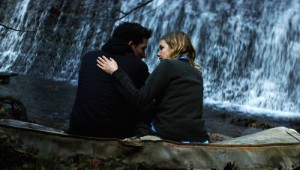 Jeppe Rønde’s harrowing new drama Bridgend made its debut during the Tribeca Film Festival this past week with both the director and star Hannah Murray (“Game of Thrones”) in attendance. Bridgend is based on the true story of a massive series of teen suicides that occurred in a small town in Wales. The suicides received media coverage at a point where seventy-nine young people had taken their lives between 2007 and 2012. In the film, teenager Sarah (Murray) moves to Brigend with her police officer father and quickly finds herself running with the pack of local teens who’ve recently lost some of their peers to suicide. They are a wild bunch who borderline worship the deceased and memorialize them in an anonymous online chat. All the while Sarah’s father, like the rest of the community, seeks to find what is causing this horrible phenomenon.

This mystery intrigued director Rønde who spent time in the actual community and eventually shot the film there on location. Rønde and Murray both spoke to me on the red carpet about how important it was to dramatize the town’s story in a respectful manner.

Lauren Damon: You spent time in the actual community of Bridgend, what was that like and did you go there with the goal of developing a film about it?
Jeppe Rønde: I went there with the–a goal is a strong word–but I went there to try and find out what is this about? And why is this tragedy happening? Which is of course may be a mystery, because it doesn’t make sense. Why do so many youngsters kill themselves? So I was trying to figure out how can this happen? And how can it keep on going?

LD: Was Hannah’s character influenced by a particular story that you found there?
JR: Not particular, but I wrote the whole script through all the characters that I met there. Many of them. And I mixed them into, you know, one character. So you couldn’t do like a one-to-one, ‘oh this is that character’, because I would never be able to do that. Because that would be morally incorrect. So I built it on the reality I met but also making it a fiction which was important to me. Because it cannot be too close to the real people living there… 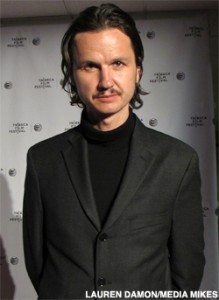 LD: How did you find filming in the actual location?
JR: Actually to film on the location was very important to me. Because you feel the presence of what is there. The geography is specific. There’s a fog coming, you know every day it rains a lot. And it can feel depressing. And at the same time it is extremely beautiful. And it was easy for me to get the actors into this state of mind that I wanted them to be in.

LD: How much preparation went into your work with the DP to get this very ominous atmosphere?
JR: Of course we wanted to push forward a feeling of something that would be this collective subconsciousness. Something that’s within us that’s a darkness. So we wanted to put that also into the shot.

LD: What would you want audiences to take away from the ending of the film?
JR: I hope that they will take away from the ending that this is something that is beyond understanding of who we are as human beings. That there’s something in us that we don’t know what it is…that if we do look into it carefully, then we can maybe choose one or the other. Because it is an open ending.

LD: Is this still going on? All the suicide statistics associated with the town seem to come from 2007 and 2012.
JR: Because that’s the only figures that you can find officially. But unfortunately yes, it is still happening. From what I heard and no one really knows, but the media was shut down in 2010. So it’s difficult to say, but you would have to ask the authorities there.

Hannah Murray, who currently plays Gilly on “Game of Thrones” had a breakout role in the UK teen TV drama “Skins” but saw the role of Sarah as a wholly different teen.

LD: What was your initial reaction to the script?
Hannah Murray: I’d never done something that was based on you know, based loosely on true events. I felt a huge sense of responsibility and I didn’t really want to get involved unless I thought things were going to be done sensitivly and respectfully. And when I had been offered the part I had a meeting with Jeppe to ask him why he wanted to make this film because I was worried about someone, I don’t know, wanting to do it in a kind of half-hearted way or taking advantage. So when I understood how long he’d taken to research it and how dedicated he was to the subject matter, and how involved he’d become with the community, I thought ‘Oh, you’re going to do this right and you’re going to do this honestly and bravely and compassionately.’ So that made me decide that it was something that it was worth jumping into.

LD: How was it shooting in that location?
HM: I don’t think we could have made the movie anywhere else. When you go there, you feel something very unique about that place and it’s beautiful. It’s incredibly beautiful but in a very bleak way. And there’s something kind of almost mystical and strange about it. I loved being there but it was, yeah you do feel a sort of sense of darkness in the air. Maybe that was because of the story we were telling though, I’m sure.

LD: You have this background coming from “Skins” of acting in the midst of a bunch of wild teens, did you feel a little like you were tapping into that again?
HM: I mean I feel like they’re incredibly different projects in sort of every way. Skins shows a dark side of teenage life but it also shows an incredibly fun and comedic side of teenage life. And in this, I mean, one of my friends saw this movie and described it 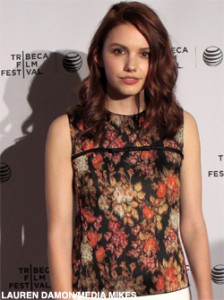 as a gangster movie. Which I think is a really really interesting way of looking at it. And I think there’s a kind of, there’s a level of tribalism in this world that is so much more severe than anything that related to my teen experience. Whereas “Skins” I could kind of go like ‘Oh yeah, it was fun, we went to parties.” It was very different.

LD: How was it different on set with between the days you had you just acting with the pack of young actors versus the more intimate, intense scenes of just your character and her father?
HM: I mean that was one of the most amazing things about the project was all the different people I was working with were so different in terms of experience they’d had and the types of things they’d brought to these characters. So yeah, I remember every day we had the gang there it was just like this injection of energy and they were so exciting and would throw all these amazing lines that they’d improvised…And they would talk a thousand words a minute. And when I was working with Steve [Waddington] I felt like a child and when I was working with the kids I felt more like an adult because I felt sort of more responsible for them. And then I also had the love story with Josh O’Connor, which was a whole other element to play out…but I love everyone who worked on the film. It was such an amazing group of people.

LD: Finally, congratulations of continuing with Game of Thrones–especially this season’s opener being their highest rated–
HM: Oh was it?
LD: Apparently
HM: Oh that’s great!

LD: Why do you think the audience just keeps growing for it?
HM: I think it’s a REALLY good TV show. I think people put an incredible amount of hard work into it. The production values are really high and I just think David [Benioff] and Dan [Weiss] and George [RR Martin] are geniuses. I just think they’re so smart…And George created this amazing world in the books and these incredible characters and then the way David and Dan have adapted it is beyond. I think they’re so so smart.

LD: And how many times a day does Kit Harrington have to hear he knows nothing?
HM: He gets told quite a few times. Not by our crew, but I’ve seen people come up to him in the street and that’s allllways the thing they want to say to him.

LD: How about you, do you get fan recognition out and about?
HM: Um, a bit. Less so than I think some of the others. I think because I’m–well, now I have red hair, but I’m normally blond in real life whereas I have dark hair in the show so I can kind of be a little bit more under the radar. But I still, I’m surprised how many people still spot me. I think because there are so many fans of the show.