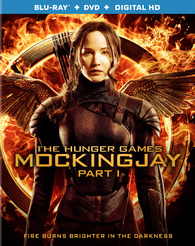 Unlike the rest of the world “The Hunger Games” franchise, hasn’t delivered for me at all. The first one was just one. I thought that “Catching Fire” was awful and “Mockingjay Part 1” is another long drawn out lead in for the final film. Personally, I love Jennifer Lawrence much more than I did after the first Hunger Games and her character is more likable but the film is not. I will definitely watch the second part of this film to finish the series but expectations are low. I think the whole “Part 1” and “Part 2” business of these epic films are really getting old.

Official Premise: The worldwide phenomenon of The Hunger Games continues to set the world on fire with The Hunger Games: Mockingjay – Part 1, which finds Katniss Everdeen (Jennifer Lawrence) in District 13 after she literally shatters the games forever. Under the leadership of President Coin (Julianne Moore) and the advice of her trusted friends, Katniss spreads her wings as she fights to save Peeta (Josh Hutcherson) and a nation moved by her courage.

Lionsgate is delivering this release as a combo pack with a Blu-ray + DVD + Digital HD copy included. Even though, I am not crazy about the film, the Blu-ray merits are very impressive. The 1080p transfer is gorgeous. The CGI in the film is well-blended. I was most impressed with the audio tracks. First we get a Dolby TrueHD Atmos, which basically translates to Dolby TrueHD 7.1 for those units that are not compatible. It is an amazing track that delivers the epic feel that the film aims for. There is also an interesting track, which is a 2.0 Dolby Digital Optimized for Late-Night Listening, not very epic but still a neat option.

The special features are also quite impressive. “The Mockingjay Lives: The Making of Mockingjay – Part 1”: is an eight-part feature-length documentary. If you love these films, this is a must watch. There are two featurettes included. The first is “Straight From the Heart: A Tribute to Philip Seymour Hoffman” and the second is “Songs of Rebellion: Lorde on Curating the Soundtrack”. There is also a music video for “Yellow Flicker Beat” from Lorde. Lastly there is an Audio Commentary from Director Francis Lawrence and Producer Nina Jacobson and some deleted scenes.