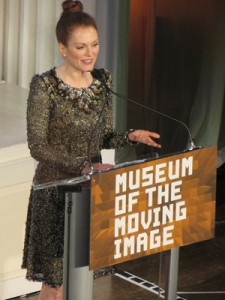 Jan. 21 – Call it a pre-Oscar victory lap. Tuesday night in New York Julianne Moore was honored by the Museum of the Moving Image at their annual gala. This salute comes right as Moore is tipped to win Best Actress this year for her portrayal of a linguistics professor facing a devastating Alzheimers’ diagnosis in Still Alice. On her way into the presentation, she described taking on the role as “a privilege. It was a privilege to learn about [Alzheimers’]. And the people, because I had no personal experience with it, I spent about four months doing research and the people that I spoke to were so incredibly generous with their time and their experience and their information. So I learned a tremendous amount and it was a great experience.”

Moore was supported by her children, Cal and Liv, husband Bart Freundlich and friends at the tribute who enjoyed a presentation about the museum in Queens before taking a thorough look at her cinematic career. On hand to introduce highlights of Moore’s work were former co-stars including 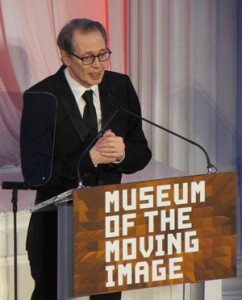 Chloe Grace Moretz (Carrie), Sarah Paulson (Game Change), Ethan Hawke (upcoming Maggie’s Plan) and in a pre-recorded message, Mark Ruffalo (The Kids are All Right) who said acting alongside Moore and Annett Bening at the same time was like “sharing the court with Michael Jordan.”

Some of the most joyful crowd reaction came from Steve Buscemi introducing a clip from “Stoner Citizen Kane”, The Big Lebowski which featured both Moore and Buscemi though never on screen at the same time. On the red carpet prior to the event, Buscemi said he “certainly had no idea” that Lebowski would go on to be the cult classic it’s seen as today. He also had nothing but kind words for her when asked what people take away from her work: 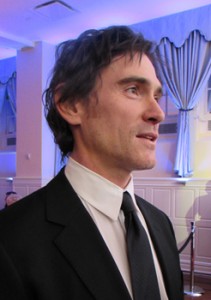 “She always puts her heart into anything she does. It’s amazing all the different characters that she played and yet there’s something of herself. She really gives I think to every character and that’s what I think everybody responds to.”

Also on the carpet, actor Billy Crudup described working with Moore and her director husband, on their two films, World Traveler and Trust the Man as “Superb. It was so easy, I was dying for either of our movies to be hugely successful so we could do it again and again and again because the joy of getting to work with your friends in your home city is, for people who travel all the time and have to form new families every time they go somewhere else, you know it was one 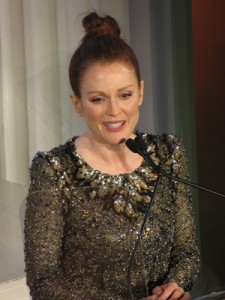 of a kind.” Asked his favorite role of Julianne’s Crudup replied “I was just thinking of a couple of them but A Single Man…I thought that was an exciting, excellent performance.”

Moore graciously accepted the award from MMI director Carl Goodman and MMI Co-Chairman Herbert Schlosser before creditting her own family story “with Bart and Cal and Liv that has given [her] life so much meaning.”

Julianne Moore will next be seen in Maggie’s Plan.

For more information about the Museum of the Moving Image, visit their website.