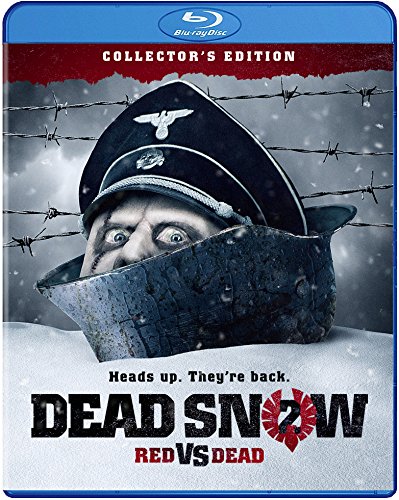 To celebrate the release of “Dead Snow 2: Red vs. Dead”, we are happy to be giving away THREE Blu-rays of the film. If you want to win this great prizes, please leave us a comment below or send us an email with your favorite zombie film. This giveaway will remain open until January 2nd at Noon, Eastern Time. This is open to our readers in US and Canada only. One entry per person, per household. All other entries will be considered invalid. Media Mikes will randomly select winners. Winners will be alerted via email.

Martin (Vegar Hoel) hasn’t had the best vacation. He accidentally killed his girlfriend with an axe. He cut his own arm off with a chainsaw. And his friends STILL got devoured by a battalion of Nazi Zombies. This morning, he woke up in a hospital bed with a new arm – but it’s a super-powered Zombie arm that wants to kill him, and anything else it can reach. Martin’s PISSED. And with the help of his new Zombie Squad pals (Martin Starr, Jocelyn DeBoer, Ingrid Haas), he’s gonna deliver some payback to Colonel Herzog and his precious Nazi gold – by raising an undead army of his own.