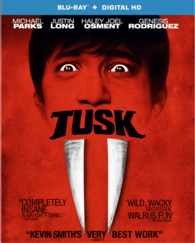 When you heard about a premise like “Tusk”, you just shake you head and saw ‘What the fuck?”. Well after seeing the film twice, I am no less left with that exact same question. I have a feeling down the line this is going to become quite the cult classic. I mean literally it is about a guy who turn another guy into a freaking walrus. I mean is just crazy enough to interest anyone, who loves the horror genre.

Official Premise: A podcaster (Long) looking for a juicy story is plunged into an unpredictable, unsettling and absurd nightmare after he travels to the backwoods of Canada to meet an eccentric recluse (Parks) with a lifetime of adventures-and a disturbing fondness for walruses.

Since the film comes from Kevin Smith (Clerks, Dogma, Mallrats) and was spawn from a podcast discussion, this crazy idea makes much more sense. It stars Michael Parks (“Django Unchained”), who honestly deserves an Oscar for this role, Justin Long (“Dodgeball: A True Underdog Story”), Haley Joel Osment (“The Sixth Sense”) and there is also a surprise appearance from Johnny Depp (if you can recognize him).

Lionsgate is releasing this film as a combo pack with a Blu-ray plus Digital HD included. The special features included are some deleted scenes, multiple “making of” featurettes looking that the behind-the-scenes and also a retrospective on Kevin Smith’s career. There is also a audio commentary with Kevin Smith, which is a worth checking out alone. Lastly there is the original podcast that inspired the film.