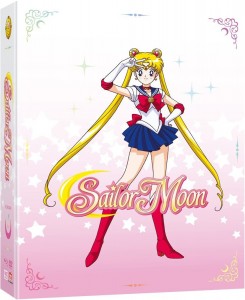 “Sailor Moon: Season 1 Part 1” is first volume of the classic 1992-97 anime. This set includes episodes 1-23 as well as an 88-page full-color premium booklet. This is only the beginning of this series as there should be at least nine additional sets until the complete 200-episode series has been released. This show was one of my wife’s favorite, so she was excited to have it on Blu-ray…unfortunately the transfers are a quite a bit of a mess and it is during going to upset many fans.

Synopsis: Usagi Tsukino is a cheerful 14-year-old schoolgirl who often finds herself in unwanted trouble. One day, she saves a talking cat named Luna from some mean kids, and her life is changed forever. Luna gives Usagi a magic brooch that transforms her into Sailor Moon, defender of love and justice! Now Usagi must work with Luna to find the other Sailor Guardians and the Moon Princess, whose Legendary Silver Crystal is Earth’s only hope against the dark forces of the evil Queen Beryl.

According to Viz, in order create the Sailor Moon Blu-rays they used the masters that used to create the 2009 Japanese DVD sets. They are said to be original, uncropped 4:3 aspect ratio, uncut remastered episodes, which is all good but really wasn’t impressed at all. Hopefully they have better plans for the rest of the episodes otherwise after this fans are not going to buy this. There is ghosting throughout. The item is over-sharpened and there is a lot of lost detail, which is a shame.

There are several audio options, including a complete English dub with a new voice cast, as well as the Japanese DTS-HD Master Audio tracks with English subtitles. The special features aren’t anything special either besides the Behind the Scenes: Dub Recording featurette. Other than that there is the Announcement Panel & Fan Reactions, Official Announcement Trailer, Art Galleries and a Clean Opening and Ending included here.