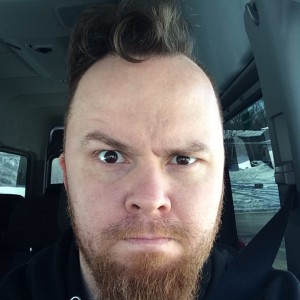 Psychostick is probably best known for their song “BEER!!”, the heavy metal anthem to irresponsible drinkers everywhere that made the rounds on the Internet back in the early 2000’s and popped up frequently on active rock stations across the country. They’ve had their tongue firmly planted in their cheek for nearly a decade and a half and now they’re about to enter a new chapter in their band history. After a successful Indiegogo campaign, Psychostick was able to raise the funds to build their very own studio in their home. That means they’ll be able to put out more music and content to their rabid comedy-metal fans. Media Mikes had a chance to catch up with the lead singer, Rawrb, about what kind of plans they got in the works and their upcoming summer tour with Dog Fashion Disco and The Bunny The Bear.

Jeremy Werner: I know the first thing people will wanna know is everything and anything about the new album you’re working on. So, is there anything new about the album you’d like to share with us that people might not already know about?
Rawrb: The only thing that’s been released about the new album has been “Obey the Beard”. The actual title and track listing hasn’t been announced yet because we’re still going back and forth on a lot of that stuff. We’ve recorded a lot of songs and it’s coming together. Once everything really starts to get finalized. We’ll really start releasing more info.

JW: Now I know during the Indiegogo campaign, one of your stretch goals, if you raised the money, was to release a covers album. Sadly you guys didn’t reach that goal, but is a cover album still in the cards?
Rawrb: We talked about it, but we still might do it eventually. We were gonna do it sooner than later if we hit the stretch goal but we definitely want to. It’ll just be longer before we can.

JW: So you’re about to hit the road with Dog Fashion Disco and The Bunny The Bear…can fans heading out to the shows expect a new song on this upcoming tour?
Rawrb: We’re going back and forth on that one too. There’s one in particular we wanna play, but I’m not sure if we’re gonna have time. We’re a little bit short on the set for us, but I think we’re gonna try and squeeze another new one in there. We’ll see.

JW: A short set-list? It’s not a co-headlining tour with Dog Fashion Disco?
Rawrb: No, probably not, it’s pretty much their tour. They invited us out and we were very ecstatic to do that because .they still have a huge fanbase. I don’t know if you saw their Indiegogo, but they just blew it out of the water. 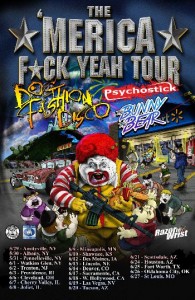 JW: Oh yeah. It was really impressive. It’s good to see both of you guys hitting your initial goals without a problem.
Rawrb: Yeah, so honestly, it’s not a co-headlining tour. We’re the opening act for them the whole tour.

JW: Now I saw they’re heading overseas for the first time to play three nights in England…so is that a sign that maybe you guys are heading overseas for the first time?
Rawrb: We’re trying. We’ve made a few new contacts and it’s the closest it’s ever been so I’m pretty optimistic. I think it will happen, maybe this year or maybe next year, hopefully. I’m hoping that it will happen later this year because we’ve been overdue for this for a long time. We have a pretty good following overseas and we’ve just never had an opportunity jump over there because of…silly reasons like money (laughs).

JW: So going back to the new studio you guys were able to build…what exactly does it mean for the future of Psychostick?
Rawrb: We’ll be able to produce music more frequently. One of the biggest challenges and why it’s been so long since we’ve had a new album, is that we tour so much and don’t have the resources to sit down and just crank out another album on a more frequent basis, but now we’ll be able to do that. I’m hoping we’ll release more music, more frequently. Instead of waiting three years, it’ll be a year and a half or less. We live in our studio too, so we can wake up and write a song and record it then and there. It’s really nice to be able to do that. A lot of the obstacles have been removed so we can get a lot more done and there will be a lot more stuff coming.

JW: What musical direction will you go with now that you have this studio? Will you be focusing on cranking out more albums or maybe a couple EP’s here and there or will it be like the video posted a while back…your cover of “Reading Rainbow”?
Rawrb: We put out the “Reading Rainbow” cover a couple weeks ago and that was just us testing out the studio. We just wanted to see how it was gonna work. It happened really fast and we were super excited. We’re gonna do full length albums and little tidbits like “Reading Rainbow” We’re gonna try and do more covers too because we have a great idea and we can’t sell it because it’s owned by somebody else. So since it’s a cover, we can just go crazy with it. There’s no limits to this now, except for time…(laughs)…we’re excited.

JW: Now that you have your own studio, are you guys thinking about dropping from your label and creating your own?
Rawrb: We haven’t really thought about it. We’re very happy with Rock Ridge. We handle all of our own production, they don’t have any say in that and that’s part of the reason why we love them is because we can do what we want. We built the studio so we can crank out whatever we want and when we want.

JW: Is there anything else you want your fans to know?
Rawrb: We’re working on new stuff and there’s gonna be a lot more content like videos and gags and things like that, that we got planned. When it hits, you’ll know. It’s gonna be non-stop and there’s gonna be more music from us now that we have a studio. So we’re excited about all these things and I think our fans will be really happy with what we come out with because we are. And that’s the first step, we have to like it, before we let it out…(laughs)…it’ll be good.