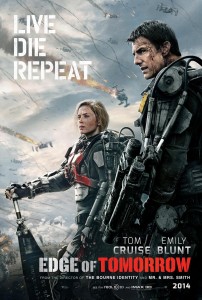 Earlier this year in January, I was writing a post for my 25 most anticipated films of the year and I came across this film “Edge of Tomorrow”, which told the story about a soldier that went into battle, gets killed and then repeats the battle over and over. I thought myself that this film was going to no question be one of my favorites of the year…and fast forward six months, I was completely right. “Edge of Tomorrow” is “Groundhog Day” meets “Aliens”. I literally haven’t left a theater that pumped in a very long time. The film was two hours long and it was honestly NON-STOP action!! When I compared back to other films I have seen already this summer, I think about “Godzilla” and “X-Men” and there were tons of “filler” scenes where I was pretty bored. Well, there is non of that shit here. “Edge of Tomorrow” is one of the best action films that I have ever seen. Yes, it is honestly that good.

When you are watching this film and you see Tom Cruise’s character Major William Cage get killed a few times and return right back to the same place, you think to yourself “Ok, when is this going to actually get repetitive” but I kept waiting and waiting and literally every time it is repeating it only gets better and better. The action gets more intense and there is even a ton of comedy throughout. The goal of the character in the film is to help Emily Blunt’s character, Rita Vrataski, find the central location for the aliens in order to destroy it. Tom Cruise has never been better in this role. This guy was a beast in this film. Same goes for Emily Blunt, who actually just got rumored to be playing Catwoman in “Batman v Superman”, she is bad-ass in this. Bill Paxton definitely steals his scenes playing Master Sergeant Farrell Bartolome. What a hoot!

This film costed $175 million to make and I swear to God, you can literally see where every single dollar went. I hate when you watch a film and it is just big budget ballooned piece of garage and there is nothing to show for it. The visual effects in this film are extraordinary. They really delivered no question, so far the best that I have seen so far this year. Top that with amazing use of 3D, during the battle scenes, I literally was not able to blink since they were so fast and in your face with the effects. My dad next to me even jumped a few times during an attack from the aliens. Speaking of the aliens, they are like “Transformers” on acid. These guys are freaking crazy and extremely fast, loved them! I left this theater practically screaming, I was so excited and I have a feeling I was not the only one. Overall, this film is the popcorn film of the summer. I can’t wait to see it again in IMAX. Do not miss this film in theaters whatever you do!