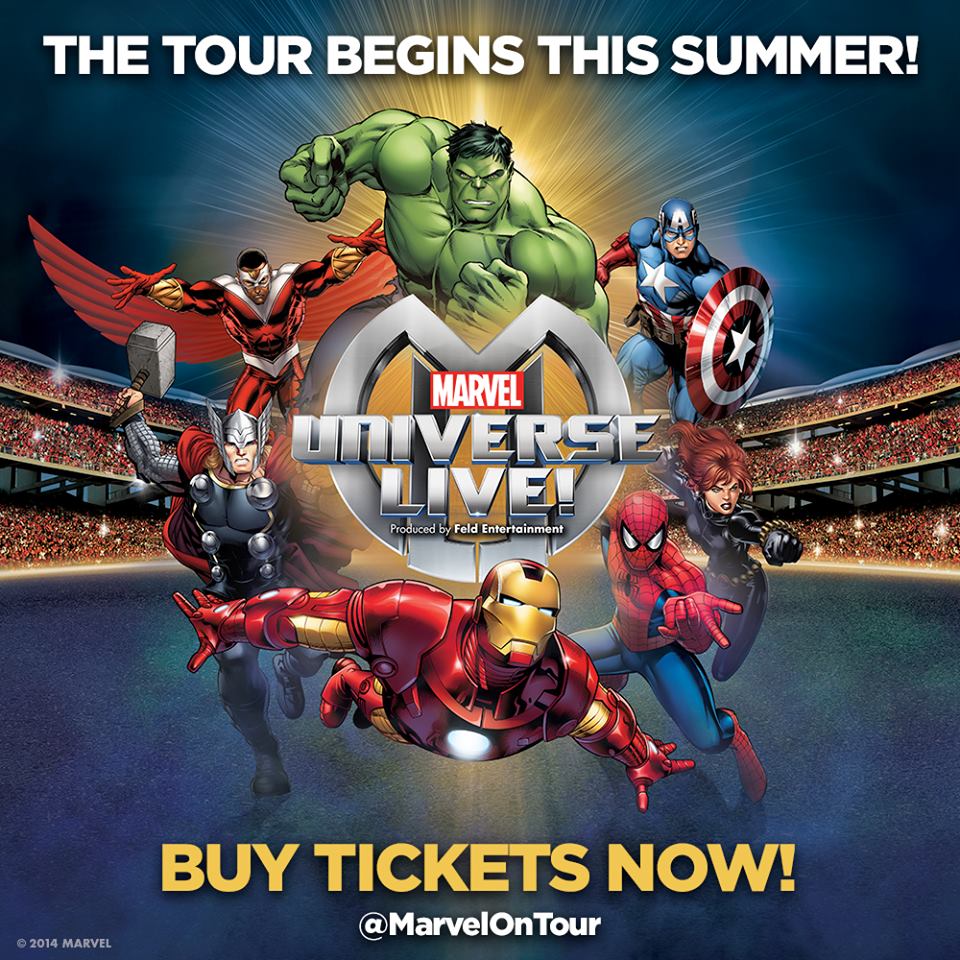 Ellenton, FL, (June 12, 2014) – After scouring the country to find the best of the best in live action performers with an amazing array of disciplines and skills, Feld Entertainment, Inc., the worldwide leader in live touring family events, today reveals the final cast of more than 50 performers ready to bring its most ambitious live event experience to life in Marvel Universe LIVE!. Debuting this July in Tampa, FL, before having its world premiere at New York City’s Barclays Center on Wednesday, August 13, the show will be the most physically demanding in Feld Entertainment’s storied history and will stop in 85 cities nationwide.

Featuring the most Marvel characters ever in one production, Marvel Universe LIVE! will be headlined by a cast trained in everything from martial arts to motocross in order to bring the Marvel Universe to the live action arena. Supported by a unique blend of aerial stunts, pyrotechnics and state-of-the-art special effects, the performers will bring an epic live action experience right in front of audiences’ eyes every time.

“From the beginning we knew that to pull off a show of this magnitude we had to have a cast that was the closest thing we could find to real life Super Heroes,” said Shanda Sawyer, director of Marvel Universe LIVE! “These are intense roles that require performers who are experts in their fields with the ability to take those skills and apply them to a number of meticulously crafted sequences, all designed to push the limits of anything the audience has ever seen in an arena show of this caliber – and they need to do this day in and day out.”

Marvel Universe LIVE! will captivate audiences with an authentic and original story that brings more than 25 Marvel characters together on one epic quest. The story is framed around the battle over the Cosmic Cube, the source of ultimate power and one of the most feared and coveted treasures in the Marvel Universe, that has been shattered into pieces by the mighty Thor in order to prevent it from falling into the wrong hands. With the pieces scattered across the globe, Thor’s villainous brother, Loki, devises a scheme to clone its powers, inciting a threat that could not only decimate Earth but also obliterate the Universe.

For an inside look at the audition process, see below:

More information on Marvel Universe LIVE! is available at www.marveluniverselive.com. About Marvel Entertainment, LLC Marvel Entertainment, LLC, a wholly-owned subsidiary of The Walt Disney Company, is one of the world’s most prominent character-based entertainment companies, built on a proven library of more than 8,000 characters featured in a variety of media over seventy years. Marvel utilizes its character franchises in entertainment, licensing and publishing. For more information, visit www.marvel.com. © MARVEL