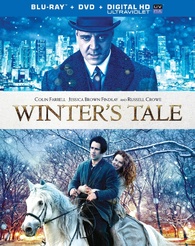 When it comes to fairy tales and supernatural tales, I am a big of a sucker despite the film being perfect or not. “Winter’s Tale” is one of those. It is far from perfect but I found something magical about it that drew me in and kept me entertained. Even though I was not a fan of “Saving Mr. Banks”, Colin Farrell was quite amazing in it. After “Les Miserables”, I am gung ho for Russell Crowe and he continues to nail it, even in this film. Jessica Rose Brown-Findlay is best known for playing Lady Sybil Crawley in “Downton Abbey”. What I want to know is how the hell did Will Smith end up in this film. That’s right Will Smith in a rather small but nice role. Even though this film was smashed by critics and failed at the box office, if you are looking to escape for two hours, I would still recommend it.

Official Premise: New York City is subsumed in arctic winds, dark nights, and white lights, its life unfolds, for it is an extraordinary hive of the imagination, the greatest house ever built, and nothing exists that can check its vitality. One night in winter, Peter Lake (Farrell), orphan and master-mechanic, attempts to rob a fortress-like mansion on the Upper West Side. Though he thinks the house is empty, the daughter of the house is home. Thus begins the love between Peter, a middle-aged Irish burglar, and Beverly Penn (Findlay), a young girl, who is dying.

Warner Bros is releasing this film as a combo pack with Blu-ray + DVD and Ultraviolet Digital Copy. One thing about this film that I did like very much was the way that it was shot and its use of colors. The 1080p transfer really looks phenomenal. I loved looking at this probably more than I did watching it as a whole.  The DTS-HD Master Audio 5.1 surround track also has a certain magical feel to it, probably thanks to Hans Zimmer’s score. In the special features department, there is some but not much included. There is a look into the production, which was based on the 1983 novel in “Winter’s Tale: A Timeless Love”. There is a profile on the “Characters of Good & Evil” with cast. Lastly there are a few additional scenes included.