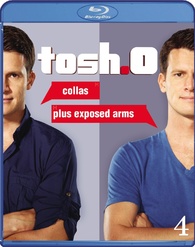 There are two kinds of people either you are a Tosh.0 fan or you aren’t. I couldn’t stand him when it first started on Comedy Central but damn has he grown on me overtime and now I can’t get enough. After releasing the past seasons and “Tosh.0: Hoodies” and “Tosh.0: Deep V’s”, Paramount Home Entertainment is delivering us another collection of the best of the worst internet videos and viral celebrities from the latest season of “Tosh.0” brought to us by Host and comedian Daniel Tosh. If you love the show and looking for a few great laughs then I would definitely recommend “Tosh.0: Collas & Exposed Arms”.

Official Synopsis: Tosh.0 delves into all aspects of the Internet, featuring razor sharp humor and biting commentary from comedian Daniel Tosh. From the absolutely absurd to the incredibly ingenious, the series features viral clips, sketches, and “Web Redemptions” which give subjects of infamous viral videos a second chance to redeem themselves from the embarrassment with which they’ve become synonymous. It’s cable TV’s most trusted source for exhibitionist weirdos, injurious idiots and all things Web.

“Collas & Exposed Arms” comes presented in 1080p with a Dolby TrueHD 5.1 surround track. Since a lot of the video were not shot in 1080p, there isn’t really anything too impressive here. It looks and sounds great but nothing special. Besides the 21 episodes includes, in the special features department, there are some Extended Redemption Interviews, which are definitely a must watch. Lastly, “Tiptoes Spoiler Uncut” is quite the hoot for sure. I can’t wait to see what Paramount has planned next for this great show.