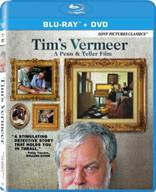 “Tim’s Vermeer” is a film that is film written by magician-duo Penn Jillette & Teller, directed by Teller, and produced and narrated by Penn Jillette. This was a film festival favorite and is making it’s way home to Blu-ray. It is definitely quite a unique documentary film. Tim Jenison is not only a fascinating topic, the film is also very entertaining and very funny, as the inventor attempts to solve one of the art world’s greatest mysteries. Since the magician-duo are know for their illusion, there is a certain magic aspect of the topic as well, since art does have that certain feeling. If you got 88 minutes to spare, “Tim’s Vermeer” is a very compelling film that will leave you very satisfied.

Official Premise: Tim Jenison, a Texas-based inventor, attempts to solve one of the greatest mysteries in the art world: How did Dutch master Johannes Vermeer manage to paint so photo-realistically 150 years before the invention of photography? Spanning a decade, Jenison’s adventure takes him to Holland, on a pilgrimage to the North coast of Yorkshire to meet artist David Hockney, and eventually even to Buckingham Palace. The epic research project Jenison embarks on is as extraordinary as what he discovers.

“Tim’s Vermeer” debuts on Blu-ray Combo Pack with a UIltraviolet digital copy. There is some great special features included as well. There is an awesome commentary with Teller, Tim Jenison, Penn Jillette & Farley Ziegler. If that isn’t enough there, is no joke, more than two and a half hours of deleted, extended & alternate scenes. Right there that is worth the purchase of the Blu-ray alone. Lastly there is a Q&A, which was taken from the Toronto International Film Festival.