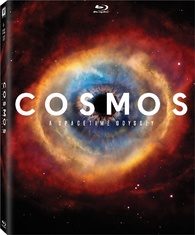 When I first show this TV series advertised on Fox, I knew it was going to be amazing. It is executive produced by Seth MacFarlane and hosted by renowned astrophysicist Dr. Neil deGrasse Tyson. The 13-episode series follows in the footsteps of Carl Sagan’s original televised study of the mechanics of the universe. I don’t know science is so interesting but I actually find it very entertaining as well as informative.

It has been more than three decades since the debut of Carl Sagan’s “Cosmos: A Personal Voyage”, which took a  stunning and iconic exploration of the universe. Seth MacFarlane has re-teamed with Sagan’s original creative collaborators including writer/executive producer Druyan and co-writer, astronomer Steven Soter. So this has the same feel of Sagan’s series but we a new 21 century technological visual upgrade.

Official Premise: As with the legendary original series, the new Cosmos is the saga of how we discovered the laws of nature and found our coordinates in space and time. The series brings to life never-before-told stories of the heroic quest for knowledge, transporting viewers to new worlds and across the universe for a vision of the cosmos on both the grandest and smallest scales.

The series is such a visual masterpiece on Blu-ray. Thje 1080p transfers look amazing as the show switches from live action with Neil deGrasse Tyson to CGI work to animated sequences.  “Wow” is literally the first words that come to my mind to describe these episodes on Blu-ray. Same goes for the DTS-HD Master Audio 5.1 surround, which has an amazing score by Alan Silvestri. I just wished that Fox would have given us a digital copy with this release.

The special features are split over the four discs. Disc one has an audio commentary track for the episode “Standing Up in the Milky Way”, which features Ann Druyan, Mitchell Cannolo, Brannon Braga, Jason Clark and Kara Vallow. Disc two includes “Celebrating Carl Sagan: A Selection from the Library of Congress Dedication” which focuses on  (1080p; 34:37) is a great piece focusing on giving Sagan’s papers and notebooks to the Library of Congress.