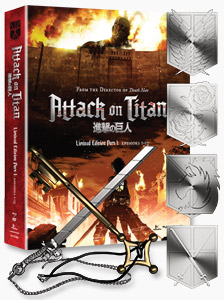 Starting off as a manga back in “Attack on Titan”, has quickly taking over the anime world. If you watch the first episode, there is literally no way you can’t get hooked. It is currently one of my favorite anime series out right now. This Part 1 release includes the first 13 episodes of the 25 episode series. I literally burned through the first 13 episodes in one day wanted more immediately. Funimation already set a release date of September 23rd for Part 2 for this series. I really hope they include the 2 OVA episodes as well. The series is also being re-adapted into two animated theatrical films set to be released Winter 2014 and 2015. The word is that there is also a live-action movie that will begin filming in summer 2014 for a planned summer 2015 release. So stay tuned “Titan” fans, there is still a lot of come!

Official Premise: When the man-eating giants called Titans first appeared, humans retreated behind massive walls. After a hundred years of safety, a colossal-sized Titan smashes through the defenses, unleashing a flood of giants and carnage in the streets. Eren Jaeger watches helplessly as one of the creatures devours his mother. He vows to kill every Titan walking the earth. Eren and his surviving friends enlist to fight against the insatiable monsters. The future looks bleak, but there’s more to Eren than meets the eye: he may be humanity’s last hope against extinction. The Titans have come to feast. Anything can happen. No one is safe.

Funimation is really delivering to its fan for this Limited Edition release. There is such a fanbase for this and they probably would have been happy with just the episodes on Blu-ray but Funimation went a step further and included tons of great goodies for this release. It comes with a 4-pin collection consisting of the Military Police Regiment, Scout Regiment, Garrison Regiment, and Cadet Corps. There is a replica of Eren Jaeger’s key necklace and also a sword necklace featuring the Titan flesh paring blades. There is a 3-D lenticular Art Card included. Lastly “Notes From Beyond the Wall: Part 1” is a 24 page digibook that is a great addition.

The 1080p transfer of these episodes look outstanding. I really love the style of this show. The announcement of the English dub cast was a big deal for this show and I was very happy with it myself. Bryce Papenbrook voices Eren Jaeger, know best for Rin Okumura from “Blue Exorcist” and Kirito from “Sword Art Online”. He does a great job. Also get voice actors include Mike McFarland and Matthew Mercer. The Dolby TrueHD: English 5.1 really delivered for sure. Of course also included is the original audio Dolby TrueHD Japanese 2.0 and English 5.1 surround tracks.

If the episodes and goodies wasn’t enough for you, there are over 100 minutes extras included on this release. First off we have “The Making of Attack on Titan”, which is a great behind-the-scenes look in this amazing anime. “Monster Character Theater – Fly! Trainee Corps” is a funny series of Flash animated shorts featuring the characters in Chibi form based on designs by Yuupon. There are two audio commentaries included on episodes 3 and 13. Lastly there is a photo gallery, textless songs and trailers included. I can’t wait to see what they drum up for Part 2!