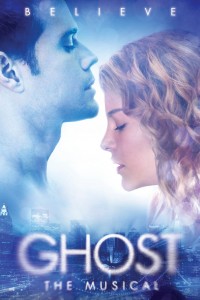 “Unchained Melody” by The Righteous Brothers is probably one of my all-time favorite long songs. I remember watching the film “Ghost” as a kid (probably too young to even get the film) and I fell in love with that song. The film is such a classic and whew knew that it could ever be turned into a Broadway play. Leave it up to the amazing, Bruce Joel Rubin (original writer of “Ghost”), who gave the words to “Ghost: The Musical” and the very fresh pop/rock score delivered by Grammy winner Dave Stewart (Eurythmics) and Glenn Ballard (writer of Josh Groban’s “Believe” and Alanis Morisstette’s “You Outta Know”). The show is such an experience, that is the only way I am able describe it. It is exhilarating and also at the same time exhausting. They not only capture the essence of the original film but also improve it to make this one of the best plays that I have ever seen on the stage.

We all know the story but just in case you don’t, here is official premise: “‘Ghost: The Musical’ follows Sam and Molly, a young couple whose connection takes a shocking turn after Sam’s untimely death. Trapped between two worlds, Sam refuses to leave Molly when he learns she is in grave danger. Desperate to communicate with her, he turns to a storefront psychic who helps him protect Molly and avenge his death”. What I love the most about this play was that my wife hadn’t seen the film in years and yet she enjoyed it just as much as myself who had just watched the film again to refresh earlier this week.

From the moment the play starts, you are wowed with amazing visuals projected at the stage. You feel like you are being swept through New York City. This video presentation is used throughout the show along with amazing light, smoke and strobe light effects. There is one particular scene that really blew me away, which takes place on a subway car that left me speechless. I have seen many different plays at Bob Carr Performing Arts Center and none of them have ever been like this. I felt like I was literally sitting on Broadway watching this performance. It was so solid and well done that I haven’t stopped thinking about it since and have already looked up tickets for another showing.

Since this show is a musical, I was very interested how they were going to tell the story of “Ghost” through music. Right from the “Overture”, I fell in love with the songs (and even purchased the soundtrack). I loved the spin that they put on “Unchained Melody” and of course it is also cued through the entire show. I cannot get the track “Here Right Now” out of my head. I have had it on repeat. “More” is a tale about the life in NYC really hits home with my having lived and worked there for many years. “Are You a Believer” was a highlight of the show and literally had me rolling in my chair.

Steven Grant Douglas gave life (or after life) to the role of Sam Wheat. He was very strong and easily the best acting performance for the show. Katie Postotnik plays Molly Jenson and this girl can really sing. She nails the song “With You”. I could see her on the stages of Broadway since she really has the chops, so she takes the best singing in the show. Last but certainly not least everyone’s favorite Oda Mae Brown (who won Whoopi Goldberg an Oscar for from the film) is played by Carla R. Stewart. Let me tell you this woman had the audience in tears, laughing that is. She was the perfect comedic relief for this film and was hit for hit with each of the jokes. Put these amazing performance together with a wonderful production and you have a guaranteed hit with “Ghost: The Musical”, do not this miss on the stage!

“Ghost: The Musical” will be at Bob Carr Performing Arts Center from May 13th-18th. If you miss it in Orlando, be sure to check it out on the rest of its US National Tour below:
WORCESTER
HANOVER THEATRE
JUNE 5 – JUNE 8