John Ottman is known best for his roles of editor and also composer on numerous films including “The Usual Suspects”, “X2”, “Jack and the Giant Slayer, “Superman Returns” and most recently “X-Men: Days of Future Past”. Media Mikes had a chance to chat with John again about working with Bryan Singer and returning to the “X-Men” franchise.

Mike Gencarelli: Having score “X2” and now “X-Men: Days of Future Past”; tell us about returning to the franchise and about your approach to this score?
John Ottman: “X2” was one of my first big movies that I got to tackle. I always look back at those times very fondly because that exhibits an exciting time in my life. It was also a film that went very smoothly for all of us involved. I looked forward to going back into the series, especially since musically I had themes that I always wanted to go back to but wasn’t able to because we didn’t stick around for the third film. In the score for “X2”, I wrote a lot of motifs that I had planned to put somewhere in the next movie. So it always irked me that I wasn’t able to complete what I started. So this film came me an opportunity to pick up where I left off with “X2”. Naturally, it is a different kind of story, a little more modern, and also eleven years later. So I was just really excited that I got to preserve my themes.

MG: Since the film takes place in the past and the future; what was it like combining those two different sounds into one cohesive score?
JO: That is the trick actually to make it all cohesive. But because there is such a vast difference between the past and the future, it wasn’t that difficult to work with because the score was actually set the difference between the two time periods. In the 70’s, I got to infuse some analog synthesizer sound, some electric piano and guitar and so forth. So, that was actually really fun for me to do.

MG: What was your biggest challenge on “”X-Men: Days of Future Past”?
JO: Time travel [laughs]. I have said this in a few interviews. When I look back at this movie, I think about a Whac-A-Mole game. With time travel, you Whac-A-Mole to solve one problem and then create another. We just kept whacking and whacking until the smallest mole comes up that we could live with. Since you can never solve every issue. Really my job was to build consensus and really fight for things I thought we needed to do in the movie. That is how I look back on my experience on the movie basically. There was a lot of passion pleases to do certain things [laughs]. It was a very complicated film. The main challenge was the keep the story clear given all the convolution of the various situations.

MG: This is your seventh film working with Bryan Singer; what keeps you guys coming back together? 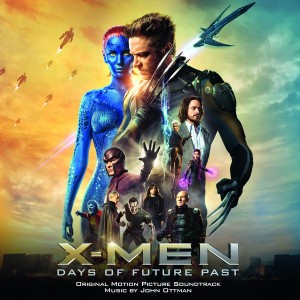 JO: I guess good stories and scripts. He keeps telling me to edit his films otherwise he won’t let me score them [laughs]. It is the blackmail that keeps us together.

MG: Speaking of the editing, as with “X2” and many other films, you took on the role of editor as well as composer; tell us about this other aspect of working on the film?
JO: The short story is that when we did out first feature film way back, “Public Access”, which won the Sundance Film Festival. I came on as the editor on the film and also ended up writing the score as well. So when we put “The Usual Suspects” deal together, I said “I just want to write the score” and Bryan said “Hell no, you are going to edit the film as well”. He saw the symbiosis that occurs when you do both jobs. Basically the same story just continues through today. He prefers that I leave my scoring career and go into what I call “editing jail” for two years. Both tasks are telling the story and if they are both being done by the same person it can bring better clarity into the storytelling.

MG: What is your next project and what can we expect next?
JO: Life [laughs]. A life. I purposely did not line anything up after this. I didn’t want to jump right into another project. After “Jack and the Giant Slayer” and then “X-Men: Days of Future Past”, it was three solid years and I need to take a break. I am sure I will get itchy and start looking in a few months but then again maybe not [laughs].