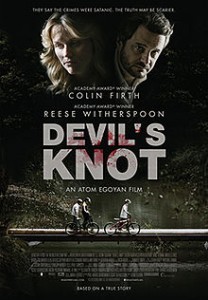 “Devil’s Knot” is based on the triple murder of three eight-year-old boys in West Memphis, Arkansas, on May 5th, 1993; and the subsequent arrests, trials, and convictions of three teen-age boys.

The film focuses primarily on two people: Pam Hobbs (Witherspoon), the mother of one of the murdered boys; and Ron Lax (Firth), a private detective who has offered his time and resources to the defense team. What ensues is a hodge-podge of images, characters, lines from court-room transcripts and footage from previous documentaries about the same case. If this film could be rated based just on its ability to approximate the time period or on the actors offering extremely convincing impersonations of their real-life counterparts, then this film would be given an “A” for effort. However, none of the performances were strong enough to merit mentioning. Which is disappointing considering the film does boast two Academy Award winning actors. In fact, throughout most of the film, I felt as if I were watching a dress rehearsal. If anything, the performances are hindered due to the wealth of footage that has been seen in no less than four documentaries featuring the real people. The same can be said for the writing. When I heard dialogue taken from the transcripts – or previous documentaries – most often the lines were not entirely correct – but perhaps slightly paraphrased.

As excited as I was for this movie, I still wondered what the purpose of it could be. Based on Mara Leveritt’s book of the same name from 2002, I didn’t find this to be that accurate of an adaptation. Granted, it’s a non-fiction work and not a novel; but the book only covers 1993 to 2001. The time period of the film spans from the time of the murders in May of 1993 to the sentencing of the accused men during the Summer of 1994; yet it references evidence and accusations that came to light in 2007 and later. I would have rather seen a film called “The West Memphis Three” than “Devil’s Knot”; that way it would allow for information that spans the twenty-year history of this case. That being said, I will concede that “Devil’s Knot” is a much more enticing title.

When one reads the book of “Devil’s Knot” you walk away almost convinced that a particular person is guilty of the murders; since that was the main focus of the defense and the followers of the case at the time of its writing. However, in this dramatized film that person is given little screen time, and barely factors into the story at all. Which would be fine if the film were a general look at the case and not based on this specific source material.

I don’t see how anyone not familiar with this case would be interested in this movie. Even with its ensemble cast of notable actors, it’s not a strong vehicle for any of them. It is an interesting watch for followers of the West Memphis Three case, but I highly doubt even I will watch it as often as I do Joe Berlinger and Bruce Sinofky’s Paradise Lost Trilogy, or Amy Berg’s West of Memphis.

If this movie accomplishes anything, in my opinion, it will be that it keeps the conversation going about this case. As the film points out, before fading to black, there are too many unanswered questions. “Devil’s Knot” will also serve as a way to honor the memory of Ron Lax, whom sadly passed away in October of 2013. He was a firm believer in the innocence of the three accused men from day one, and worked extremely hard to get them out of jail and exonerated. The latter of which has yet to happen.