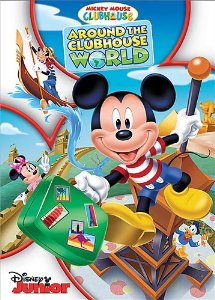 “Around the Clubhouse World” is the latest full-length feature from the Disney Junior series “Mickey Mouse Clubhouse”. I have searched the internet and I have not see any mention of this episode airing on Disney Junior yet, so this DVD looks to be the premiere and only place to see this as of right now. It is yet another great full-length feature after the last one “Minnie-rella”, which my 2 year old daughter still watches at least one a week. This special takes us exploring through France, Italy, China and more with Mickey and gang on a global adventure packed with song-filled fun. As an added bonus this DVD releases also comes with a passport activity book for any young explorer! If you kids love “Mickey Mouse Clubhouse”, this is a yet another amazing themed release for the show.

Official Premise: Pack your bags and grab your passport. Join Mickey, Minnie and pals on a whirlwind trip Around The Clubhouse World! Climb the Eiffel Tower in France and say “bonjour” to Mademoiselle Daisy and Monsieur Donald Duck. Then, rescue Gondolier Goofy when he goes adrift in Italy’s Grand Canal; solve the mysterious riddle of Pharaoh Pete’s pyramid in Egypt, and meet a dancing dragon at the Great Wall of China. With your help – and the right Mouseketools – your Clubhouse friends can get their special passport stamped at each wonderful location. Featuring over two hours of song-filled fun, including four additional episodes, this global adventure proves it’s a small world after all!

Along with the full-length episode, there are four additional bonus episodes includes from “Mickey Mouse Clubhouse”. “Donald And The Beanstalk” goes back all the way to the first season and is the sixth episode ever aired for this series. Funny enough “Goofy On Mars” is also from the first season and was the seventh episode aired. “Mickey’s Handy Helpers” comes from the second season and was the twenty ninth episode. Lastly “Pluto’s Dinosaur Romp” is a little more recent from the end of season three and in fact the ninety fourth episode in the series.  According to the trend of DVD releases, we should be getting another in December of 2014, so curious anxiously waiting for that.