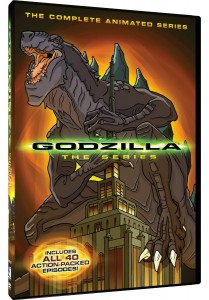 Yes…yes, we all know how much the U.S. 1998 remake of “Godzilla” sucked. This animated series was a way to cash in on the Godzilla madness but for those who hated the film didn’t pay any attention to this show. It’s run on TV was ended short airing 38 out of 40 produced episodes. I have to admit, I never watched this during the original airing since I was among those who did quite hate the ’98 film but thanks to Netflix, I decided to give this show a go recently. Yes, it is a cheap 90’s cartoon but I am also a sucker for 90’s cartoons. If you are looking to dumb down your brain and just watch some Godzilla related goodness in animated form, this show isn’t as bad as I would have thought. Plus for the cheap price (you can get it new from Amazon Marketplace for around $5 bucks), it is totally worth it. Also did I mention the star of “Sharknado”, Ian Ziering, also voices the main characer!? Bonus cheese!

Official Premise After helping take down Godzilla, biologist Dr. Nick Tatopoulos (voice of Ian Ziering) stumbles upon his hatchling, who bonds with the scientist as a parental figure. Recruiting his own environmentally-directed research outfit HEAT (Humanitarian Environmental Analysis Team) Nick sets out to study not only this new generation, but also to investigate the increasing reports of monsters of all types and other environmental anomalies menacing the Earth. Each exciting episode is a pulse-pounding monster-hunt driven by Nick’s team accompanied by their 300-foot giant reptile as they travel the globe defending humankind against mutant threats.

Disc 3 includes the following episodes: “Wedding Bells Blew”; “Juggernaut”; “Shafted”; “Trust No One”; “Lizard Season”; “The Ballad Of Gens Du Marias”; “Ring Of Fire”; “Protector”; “Vision”; “Freak Show”. Last but not least disc 4 includes the following episodes: “Metamorphosis”; “Where Is Thy Sting?”; “Underground Movement”; “The Twister”; “S.C.A.L.E.”; “Future Shock”; “End Of The Line”; “Area 51”; “Tourist Trap” and “Cash Of The Titans”. So if you can count these all add up to 40 episodes, so this cheap DVD also includes for the first time ever the 2 unaired episodes and the series available as complete. Calling all hardcore “Godzilla” fans like myself that are in overdrive waiting for this months new film, this is your answer!