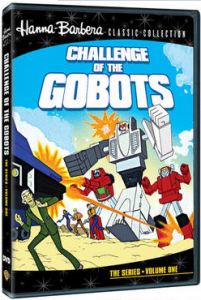 Being a young boy in the 80’s, I used to be glued to watching cartoons all day and night. Thankfully, Hanna-Barbera helped me grow up with there endless supply of cartoons. “Challenge of the Gobots” was based on the Gobots toy-line released from Tonka. Warner Archive has been behind this series for a while now as they released the “Challenge of The Gobots: The Original Miniseries” back in 2011. This volume one collection includes the first 30 episodes in this 65 episodes series. Hopefully we will not have to wait as long for volume two. Getting a chance to revisit this show has been such a treat and reminded me how much I love giant transforming robot cartoons. I just do. Love them as a kid and nothing has changed now 30 years later. A must have for any 80’s cartoon fan!

Official Premise: They’re mighty robots and mighty vehicles are back at last! Cy-Kill! Leader-1! Cop-Tur! Turbo! Crasher! Scooter! The noble Guardian GoBots and the nefarious Renegade GoBots continue the war begun in The Battle for GoBotron (see Challenge of the GoBots: The Original Mini-Series) across time and space in their epic 60 episode series that comes to you factory fresh and newly remastered – from the original film elements! With Earth as their chosen staging ground, the Renegades deploy Earth’s worst such as the deranged Dr. Braxis (voiced by Star Trek: Deep Space Nine’s Rene Auberjonois) in their quest to conquer Earth and GoBotron, so it’s a good thing the Guardians have Matt, Nick and AJ of UNECOM on their side! This 30-Episode, Three-Disc set collects the first half of the series and finds the amazing, metamorphosing cyborgs taking their fight to Ancient Rome, lost Atlantis and back to GoBotron in a series of adventures that will leave you shouting for “MOAR”!

The first 30 episodes included are: Battle for GoBotron; Target Earth; Conquest of Earth; Earth Bound; The Final Conflict; It’s the Thought That Counts; Renegade Alliance; Time Wars; Terror in Atlantis; Trident’s Triple Threat; Lost on GoBotron; Cy-Kill’s Shrinking Ray; The Quest for Roguestar; Ultra Zod;
Sentinel; Cy-Kill’s Cataclysmic Trap; Speed is of the Essence; Genius and Son; Dawn World; Pacific Overtures; Forced Alliance; Invasion from the 21st Level Pt. 1 & 2; Doppelganger; Scooter Enhanced; Tarnished Image; Cold Spell; Crime Wave; Auto-madic and Renegade Rampage Pt. 1. They are presented with their aspect ratio of 1.37:1. They look good but haven’t been restored. I am personally happy to have them available on DVD for the first time ever in one collection. Bring on volume two!