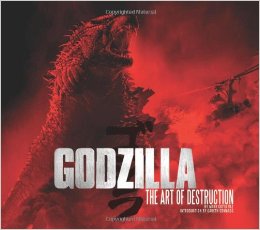 “Godzilla” is no question on my my most anticipated films of the year. I made sure to completely stay away from any spoilers from the film even including the design of the character himself. I wanted it all to be a big surprise for me when I saw it for the first time in theaters. I love the character and the films since I was a little kid in the 80’s. So for a film like “Godzilla”, I know there has to be an amazing book focusing on its creation. Thanks to Insight Editions for releasing “Godzilla: The Art of Destruction”, which is not only an “art of” but but more like a “art and making of” book. Within the first hour of having this book in my hands, I easily went through it twice just staring at the images throughout in total silence (besides the score to “Godzilla” on of course…nerd alert!) As “Godzilla” is my favorite film of the year to date, this is easily my favorite “art of” book to date as well.

Official Premise: Published to coincide with the release of Warner Bros. and Legendary’s Godzilla, directed by Gareth Edwards, this visually stunning book presents an extraordinary new vision for the beloved character through a dynamic selection of concept illustrations, sketches, storyboards, and other pre-production materials. Godzilla: The Art of Destruction is the definitive book on one of the most anticipated films of 2014. Featuring interviews with the director and key crew and cast members, the book tells the complete story of the making of Godzilla from concept to final frames. Comprehensive and enthralling, Godzilla: The Art of Destruction is a book that no fan will want to be without.

When I saw the book was just over 150 pages, I was hoping that it wasn’t going to be lacking detail and content but that couldn’t have been farther from the truth. This book is jam packed with not only outstanding artwork but also tons of details on the movie production only with comments and quote from director Gareth Edwards. The writing in the book is easily as interesting as the concept artworks. I loved getting to see the possible different variations of Godzilla and creatures that were taken from the various artists involved on the film. Watching the film I just loved the whole look and feel of it and that is also represented in this book. We get to see various landscapes and visual locations shots from the film. If all that isn’t enough there is also a full fold-out movie poster from the film with the soldiers diving from the sky and Godzilla in the background barely seen. If you love Godzilla, this book is a no brainer purchase.