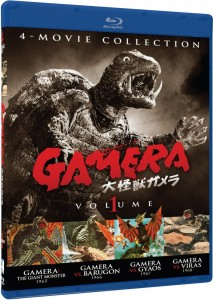 Besides me, who simply cannot get enough of giant monsters battling giant monsters. Originally conceived as a rival to Toho’s “Godzilla” franchise, “Gamera” has become a cult classic series. With its tagline “Guardian of the Universe. Friend of all children!”, the giant turtle has protected the people of Japan and kicked some monster ass for many years starting back in 1965. These two new volume Blu-ray sets are available for the first time ever, thanks to Mill Creek Entertainment.

Mill Creek Entertainment has really been behind the franchise for years. Back in 2011, they also released the three Heisei trilogy films on Blu-ray with glorious transfer. The same is the case with these films. They really did a phenomenal job hooked this eight films up with a solid high definition 1080p transfer. The color reproduction is very impressive and even though there is some age here and there it is quickly overlooked due to a vibrant print. The only part that stuck me by surprise is no English dub track here. There is only a Japanese 2.0 Dolby Digital track with English subtitles. included for all eight films. It works but still could have used at least an HD audio track.

Volume 1 includes the following “Gamera” films:
“Gamera: The Giant Monster (1965)” Official Premise: The first entry of this Sci-Fi epic takes place midst the peak of the Cold War, as conflict between the East and West transforms into a nuclear disaster! This atomic explosion releases more than massive radiation, it awakens an ancient and long-forgotten legend of Gamera!

“Gamera vs. Barugon (1966)” Official Premise: Once the fear of Tokyo, Gamera returns to Earth to save it from the malevolent monster Barugon who is able to freeze anything its path. This unholy battle between fire and ice challenges the survival of mankind while bringing them an incredible slam-bang, knock-down monster slug-fest!

“Gamera vs. Gyaos (1967)” Official Premise: The third entry of this classic monster series continues when a volcanic eruption awakens Gyaos, a gigantic vampire-like bat who has a ravenous hunger for blood. Gyaos is Gamera s most popular foe, returning in four more films (not counting the stock footage in SUPER MONSTER). Can the fire-spitting terrapin Garmera defeat this nocturnal beast?

“Gamera vs. Viras (1968)” Official Premise: The reign of terror continues when aliens take two boy scouts hostage to blackmail Gamera into aiding their invasion of Earth. When that plan fails the giant alien leader Viras battles the flying turtle in a duel to the death. 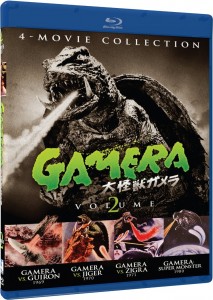 “Gamera vs. Guiron (1969)” Official Premise: Gamera, the giant flying turtle, spins into action when two young boys board a spaceship and are hijacked to a strange planet on the other side of the sun. While the boys evade the clutches of two brain-hungry alien beauties, Gamera must deal with a knife-nosed monster named Guiron.

“Gamera vs. Jiger (1970)” Official Premise: The fire-breathing action continues as Gamera battles one of his greatest foes, Jiger, a horned monster reminiscent of the Triceratops. Drawn to the World Expo in Osaka by an ancient statue, the evil reptile injects Gamera with its parasitic offspring to eliminate the super turtle.

“Gamera: Super Monster (1980)” Official Premise: The final entry of the Showa Gamera series plays as a highlight reel reviving all of the previous evil monsters. When the alien Zanon tries to conquer Earth with an army of monsters, three superwomen enlist the help of Gamera to foil the invader’s plans.

Besides the films, there are no special features at all includes on these Blu-ray, which is a little bit of a letdown but I am sure it was due to licensing not laziness. So now that these films are available on Blu-ray, it actually completed the entire franchise of “Gamera” presented in high-definition. The only film not released by Mill Creek Entertainment on Blu-ray is the 2006 film “Gamera the Brave”, which is in the Millennium series. So if you want to complete your set, this is also available now from Tokyo Blasters.