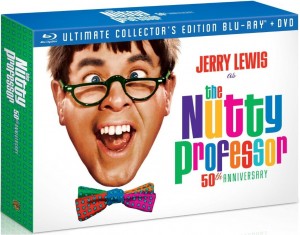 “The Nutty Professor” is easily one of Jerry Lewis’ best comedies. He directed, stars in, and co-wrote (with Bill Richmond) this very funny film, which is a parody of the classic “Dr. Jekyll and Mr. Hyde”. 50 years and this film is still a laugh riot and to celebrate that date Warner Bros is releasing this film in a brand-new 50th Anniversary Ultimate Collector’s Edition. In fact this new release also received personal input from Mr. Lewis and he helped compile some of the extra content as well. This film has always been a favorite of mine and it is great to see this wonderful released put out to remind people today of what a real comedy looks like to be honest. Warner Bros has always been a leader of giving films the treatment they deserve. Their “Ultimate Collector’s Edition” releases are like none other and this is no exception. A must have for any Jerry Lewis fan!

Here is the official premise for “The Nutty Professor”: The title’s eponymous professor is Julius F. Kelp (Lewis), a shy, bumbling chemistry teacher who has a mad crush on his student Stella Purdy (Stella Stevens). When he tires of being made fun of, Kelp develops a magic potion that turns him into smooth and smarmy nightclub singer Buddy Love. Stella is drawn to Buddy but unfortunately, the potion’s formula is unstable and Buddy keeps slipping back into Julius at the most embarrassing moments. In the end the professor’s ploy is revealed, but not before he delivers a speech calling for everyone to learn to love themselves first before others can return the favor. Stella realizes she loves him for who he is and, needless to say, the ending is a happy one.

In this release we get not only “The Nutty Professor” on Blu-ray but also in DVD format as well. But wait there is still more we also get DVDs of two other well-known Lewis comedies including “Cinderfella” and “The Errand Boy”. This are great films as well. Obviously, they don’t have relation to “The Nutty Professor” but they are a nice bonus for sure. But wait there is still more…there is also a CD included of “Phoney Phone calls 1959-1972”, which features Lewis’s collection of private prank calls secretly recorded over the years. And since we are on the topic of Warner Bros and Jerry Lewis, if you are looking for more rare films be sure to check out the Warner Archive Collection (www.warnerarchive.com), which has various other Lewis’ films available including, “Family Jewels”, “Cracking Up (aka Smorgasbord)” and “Which Way to the Front?”

Since this film is celebrating it’s 50th anniversary, Warner Bros did not take that lightly and really jam-packed “The Nutty Professor” with great extras. “Jerry Lewis: No Apologies” is a brand new intimate look at the legend who has entertained and educated audiences for more than eight decades. There is a “Directors Letter”, which is specially written by Lewis himself to present this new collection. Recreated “Being A Person” is a 96 page book that is made up of drawings and quotes inspired/written by Jerry Lewis and drawn by his personal illustrator. When the first was first made there were only 250 copies of this book made and given to members of the cast and crew of “The Nutty Professor”, so this is cool to be able to own. There is also a 48-Page Storyboard Book and a 44-Page Cutting Script with Jerry’s notes included.