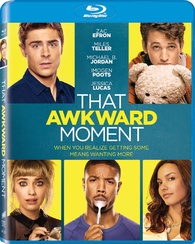 I have to admit, I think “That Awkward Moment” is definitely outside my demographic. It aims at the rauchy yet still romantic comedy teen market. What the film does have is a fantastic young and talent cast including Miles Teller, Zac Efron, Imogen Poots, Michael B. Jordan. Each of these actors are going to be huge in the business (if not already like Michael B. Jordan, who is starring in the new “Fantastic Four” reboot). Some of the jokes are solid but all together, this is really a one-timer for me. Luckily the R-rating was a saving grace besides the fantastic cast. I would recommend to the under 21 group.

Official Premise: Every relationship has that “so” moment. For a guy like Jason (Zac Efron), that’s where things always end. He’s firmly committed to non-commitment. When the marriage of his friend Mikey (Michael B. Jordan) falls apart, Jason takes it as proof that the single life is for the better. To get Mikey back in the game, Jason enlists him and drinking buddy Daniel (Miles Teller) to take a shared vow: together, they’ll stay single as long as humanly possible. Then along comes Ellie (Imogen Poots), the unpredictable, unforgettable one-night hook-up who changes all the rules. Despite all his instincts, Jason just can’t let her go… and his status is about to get very complicated.

Sony is releasing this film as a combo pack (even though it is not really pushing the fact) including the Blu-ray + Ultraviolet Digital Copy. The audio/video on this film is nothing spectacular it finds in the basic comedy section, which doesn’t disappoint but also doesn’t blow you away. The special features are decent including a Blu-ray exclusive extended gag reel and “Moment of Truth” behind-the-scenes look with cast/crew. There are another sit down with the three male stars in “Threesome: More Awkward Moments”. Lastly there are four previously released character profiles for Miles Teller, Imogen Poots, Zac Efron and Michael B. Jordan.