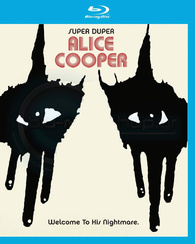 “Feed Me Frankenstein”! Watching “Wayne’s World” was one of my first exposures as a kid to the legendary Alice Cooper. “Super Duper Alice Cooper” is the first ever “doc opera” around the rock star. What really drew me to the film was the it is not your typical interview after interview doc, this contains of a great blend of documentary archive footage, animation, and rock opera. What makes this even cooler is that it is from Scot McFadyen and Sam Dunn of Banger Films. They guys produced other great music documentaries like of “Iron Maiden: Flight 666” and “Rush: Beyond The Lighted Stage”. If you are an Alice Cooper fan, this is definitely a much purchase. If not just wait till it airs on VH1 Classic this September.

Official Premise: Super Duper Alice Cooper is the first ever “doc opera” – featuring a blend of documentary archive footage, animation and rock opera that will cement forever the legend of Alice Cooper. The film is the twisted tale of a teenage Dr. Jekyll whose rock n’ roll Mr. Hyde almost kills him. It is the story of Vincent Furnier, a preacher’s son who struck fear into the hearts of parents as Alice Cooper, the ultimate rock star of the bizarre. From the advent of Alice as front man for a group of Phoenix freaks in the 60’s to the hazy decadence of celebrity in the 70s to his triumphant comeback as 80s glam metal godfather, we will watch as Alice and Vincent battle for each other’s’ souls. Alice’s story is told not only by the man himself, but through exclusive interviews with members of the original Alice Cooper band, Elton John, Iggy Pop, John Lydon, and Dee Snider.

Like most if not all of Eagle Rock’s Blu-ray’s, “Super Duper Alice Cooper” is presented in 1080i, so not full HD. It still looks impressive I have to say, but I don’t know how they get it in line with the rest of the standard Blu-ray specs. Besides teh film, there is also tons of bonus deleted scenes included. There are Alice Cooper interviews from the VH1 Classic series “Metal Evolution”. There is also additional rare footage included. Even though Eagle Rock doesn’t love Media Mikes enough to hook us up with the Deluxe Edition of this release, I am still going to give it a plug since it is quite rad. It features not only the film but also a second DVD of previously unreleased concert footage from Montreal University in 1972. There is also a CD included of Alice Cooper’s performance at the 2009 Montreux Jazz Festival. The deluxe edition comes all together in a huge LP-sized box with 60-page hardback photobook. Now that is the real must for hardcore fans.