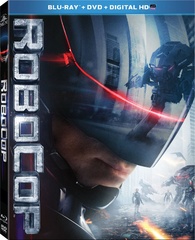 When I was a kid growing up in the 80’s, I remember sneaking a screening of director Paul Verhoeven’s 1987 “Robocop” and was literally speechless. It was extremely gory and very violent for a kid under 10 years old it was like nothing I have ever seen. Now I am all for films getting reboot, remake or whatever but it just has to be done right. I liked “Total Recall” remake, speaking of my childhood films (not perfect but still entertaining). If you are a fan of “Robocop”, you will know that it needs to be gritty and raw unlike this PG-13 watered down boring as hell piece of shit that we are given here. I literally haven’t hated a film as much as I did this film in a LONG time. It is almost embarrassing that today’s generation is going to watch this film today and think this is “Cool”, makes me so upset. Please steer clear for this film!

Official Premise: In “Robocop”, the year is 2028 and OmniCorp – the world’s leader in robot technology – sees a golden opportunity to reap billions for their company. When Alex Murphy (Joel Kinnaman) – a loving husband, father and good cop doing his best to stem the tide of crime and corruption in Detroit – is critically injured, OmniCorp grabs their chance to build a part-man, part-robot police officer. OmniCorp envisions a RoboCop in every city and will stop at nothing – no matter the cost to Alex – to make sure the program succeeds. But OmniCorp never counted on one thing: there is still a man fighting inside the machine.

I have read some reviews with people claiming that this film is actually surprisingly good if you don’t come in with preconceived emotions about the first film and just watch this as a stand alone film. Well, that is a bunch of solid bullshit to be honest. There is nothing good about this film as well. The violence in the film is all be eliminated. The character of Robocop is just bored in the film and really have no objective or any real purpose to achieve. In the original film, he had a real blood vengeance and he claimed his ticket. To top it off this film is literally nearly two hours, which makes it even more painfully.

Now on the other hand, on a technical perspective. This film does look pretty great. The 1080p transfer does work for the few actual action scenes in the film. Same goes for the DTS-HD Master Audio 5.1 but the film’s score doesn’t even come close to the original film. In terms of special features, we get right back to being let down. “RoboCop: Engineered for the 21st Century” is a three part featurette, which goes behind-the-scenes into the production with the following “The Illusion of Free Will: A New Vision”, “To Serve and Protect: RoboCop’s New Weapons” and “The RoboCop Suit: Form and Function”. Besides that there are a few Deleted Scenes Omnicorp promos and trailers included.