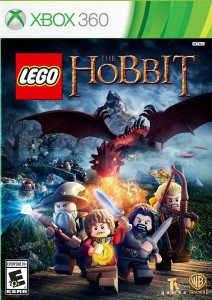 Man, I am totally obsessed with all things “The Hobbit” right now. I have recently set through numerous viewings of both “Hobbit” films back to back. I just can’t get enough. I am also an avid fan of all things LEGO (Yes, 31 year old men still play with LEGO sets). The LEGO game series have been fantastic. Making not breaking video game ground with each no installment but tons of fun. I recently loved the new “LEGO Batman” and “LEGO Harry Potter” games and “LEGO The Hobbit” is certainly no different. If you loved the previous LEGO The Lord of the Rings series, this is yet another great addition and must play for anyone looking to explore Middle-earth LEGO style!

Official Premise: From the makers of the immensely popular LEGO The Lord of the Rings, comes LEGO The Hobbit, inspired by the first two films in The Hobbit Trilogy: The Hobbit: An Unexpected Journey and the upcoming The Hobbit: Desolation of Smaug, productions of New Line Cinema and Metro-Goldwyn-Mayer Pictures (MGM) as well as the collection of LEGO The Hobbit constructions sets. The interactive game of LEGO The Hobbit allows gamers to play along their favorite scenes from the films and follows the Hobbit Bilbo Baggins as he is recruited by the Wizard Gandalf to aid Thorin Oakenshield and his Company of Dwarves. Bilbo leaves the comforts of the Shire on a journey through Middle-earth to help the Dwarves reclaim their lost Kingdom of Erebor within the Lonely Mountain.

The adventure starts with a Hobbit, a wizened Wizard and a group of valiant Dwarves as you head to the Lost Kingdom of Erebor to face the terrifying dragon Smaug. You can play the game as each of these characters from The Hobbit films including Bilbo, Gandalf, and the Dwarves: Thorin, Fili, Kili, Oin, Gloin, Dwalin, Balin Bifur, Bofur, Bombur, Dori, Nori and Ori. If that isn’t enough you are able to unlocke Sauron if you purchase the Blu-ray of “The Hobbit: The Desolation of Smaug” for a special in-game unlockable code. So you are not likely to get bored with the variety of option here. Each character has their own unique abilities to solve whichever quest you are facing.

Since we all know that location is everything even in Middle-earth. In the game you get a chance to explore and visit all key locations from the films including Bag End, head through the dangerous High Pass over The Misty Mountains in order to make it to Erebor. What I love most about LEGO in general and not only limited to the game is that you are create some many cool things. Here you are able to tacke exciting treasure quests, mine for gems, discover loot from enemies, craft powerful magical items or, of course, my favorite getting to build amazing and some times rather complicated new LEGO structures.

Another aspect that I love about the LEGO video game series is the humor in it. I love the dramatic aspect of this games and then mixed in so well is some great humor that lightening the mood. This game plays similar to past LEGO games, especially LEGO The Lord of the Rings but I do love that this game has a very new additions as well including much more ability to roam around. Also props to them for securing Christopher Lee to provide the narration between the chapters. If you enjoyed past LEGO games then you will enjoy this for sure. I apologize to my wife in advance for my constant playing of this game for the next few weeks, luckily there is a very fun multi-player option 😉

One Reply to “XBOX 360 Video Game Review “LEGO The Hobbit””