Robby Takac is the bassist and a founding member of the rock band the Goo Goo Dolls. In June of 2013 the group released their tenth studio album titled “Magnetic” to rave reviews. The group is currently out on the road performing acoustically and Media Mikes had the chance to talk with Robby about the special run of shows and this summer’s upcoming tour with “American Idol” alum Chris Daughtry.

Adam Lawton: Can you tell us about the current acoustic tour you guys are out on?
Robby Takac: That was something John has been talking about doing for awhile now. Occasionally we get asked to do one off acoustic shows and they end up being a lot of fun and something we wanted to do more of. We just finished a Canadian tour run and have a little bit of time before our next tour starts to go out and do this acoustic run. It’s a great opportunity for us to go back out and do some shows that are a little different. There’s times during these shows where we have 11 people up there performing.

AL: With the acoustic element aside what do you find to be the biggest difference between these shows and the band’s traditional shows?
RT: When we are doing an electric show there are a lot more bells and whistles. We bust out all the stops when we are performing electrically. With the acoustic shows we are playing in much more intimate venues. I think the largest room we have booked on this tour is maybe 400 seats. 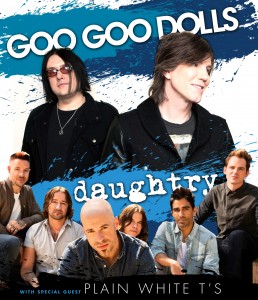 There is a different form of communication happening between the band and the listeners in this smaller setting. The shows are going great and I have a feeling that we will be more of them in the future.

AL: How does song selection play out from night to night?
RT: After putting out a number of acoustic songs we have a good catalog to choose from. We also do a bunch of our hit songs that we have reworked. A lot of the songs have been orchestrated so doing those on our own without that backing has been a little different. We thought about having things laid out ahead of time but it ended up working better when we just go off the cuff. We go out tell some stories and play some songs and it’s just a great time.

AL: Can you tell us about the bands recent video for the song “Come to Me”?
RT: I think when you do a video you are looking for something that accompanies the song. We tend to do videos that go along with the songs as the song is the most important thing. We shot the newest video up in the hills outside of Los Angeles and we feel it goes great with the song.

AL: What are the plans for the band after the acoustic tour run?
RT: We have a summer tour coming up with Daughtry that is going to be amazing. I think he has done a really great thing being able to change from what he did on “American Idol” and transforming it to what he is doing now. He had the ears and eyes of American during the time he was on that show and he has managed to keep them. We are going to have a great time this summer with Daughtry and Plain White T’s who will also be part of the tour.

AL: Can you tell us a little bit about the record label you have been working on?
RT: Good Charamel Records is the name of the label and we put out a lot of 7 inch Japanese punk rock albums.  Bands like Shonen Knife and Pinky Doodle Poodle are on our label. My wife and I actually manage Shonen Knife who has a great new album coming out soon.