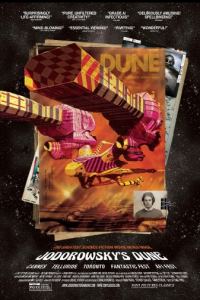 You would most likely have to be a true lover of cinema to be interested in watching this documentary. That being said, if you weren’t a fan of movies before viewing it; you definitely will be after.

I absolutely loved “Jodorowky’s Dune.” The film is a retrospective look at Alejandro Jodorowsky’s attempt to adapt Frank Herbert’s science-fiction novel “Dune” for the silver screen as told by all the key players involved: Alejandro Jodorowski, his son Brontis, producer Michel Seydoux, and visionary artists H.R. Giger and Chris Foss.

Regrettably – or fortunately – I have never read the novel “Dune” or seen the film that was eventually made in the 1980’s by David Lynch. However, after seeing this documentary, I feel like I have seen “Dune”, while also still wanting to see it, and concurrently loving it.

Jodorowsky himself carries most of this film, and it is an absolute joy to watch him talk cinema. At a young 85 years of age, he is sharp, extremely passionate, and quite funny. He fully believes, and will make you believe, that his version of “Dune” would have been the greatest science-fiction film of all time while simultaneously changing the world.

Being chock-full of fantastic and funny anecdotes about the collaboration between the artists that created the screenplay, costume designs, and storyboards for “Dune”, what is really interesting is seeing how the work done on the never-to-be-made version would eventually influence every sci-fi film to come out since. The team that Jodorowsky hand-picked would go on to be key players in some of the biggest films within the genre. Very notable for fans: it was the collaboration of Dan O’Bannon and H.R. Giger on this version of “Dune” that later gave O’Bannon the vision to call upon Giger to do designs for “Alien”.

I have always been inspired by watching documentaries about the making of all kinds of movies. Movies that were successful and even some that weren’t. And, on the rare occasion, documentaries on movies that fell apart during production, such as “Lost In La Mancha.” It’s probably all too common for movies to never make it pass the design stage. But how many of them are passed over for being too ahead of their time? Jodorowsky was trying to make “Dune” years before “Star Wars” was produced, using visuals and effects that were far beyond what even that film would achieve.

“Jodorowsky’s Dune” is funny, enlightening, entertaining and, more than anything, just a really great story. Though it’s unfortunate that his version was never made, at least film fans have this film to remind them of what might have been. And who’s to say that his “Dune” won’t ever be made?

I have one criticism to offer on this film: I just wish it were longer. I could watch Alejandro Jodorowsky talk cinema all day. Definitely check this out.