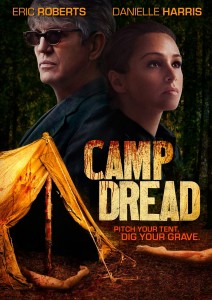 The newly released “Camp Dread” is everything you think it is, yet nothing like you would hope. I have now viewed this movie twice. One reason for this is because I was trying to understand the premise. I understood the premise as a movie, but I couldn’t fully decipher what the characters within the story thought it was.

The second reason I watched this film twice was to double the on-screen time of Danielle Harris, turning her whopping four minutes and thirty seconds of screen-time into a full nine minutes. That’s correct, Danielle Harris, whose visage is on the cover art, is only in this movie for four minutes and thirty seconds. It is her character that bookends the story.

OFFICIAL SYNOPSIS: Julian Barrett (Roberts) was the director of the 1980’s “Summer Camp” series of horror films. However, as the series ended so did his career. In an attempt to raise funding for a reboot of his glorious franchise, Julian returns to the camp where he filmed his beloved series. Under the guise of filming a reality TV show with a group of angst-ridden twenty-somethings, his aim is to use this footage as a visual storyboard for his reboot.

The movie begins with a group of people seemingly auditioning for a reality TV series. But when the group arrives at the camp setting it is made known that they are somewhat court-ordered to be there for therapy. They HAVE to be there, yet they were auditioning? At the same time, Rachel Steele (Felissa Rose) arrives. She is the actress whom starred in the “Summer Camp” series; but since then she returned to school and became a therapist. Showing off her skills as a therapist, she proceeds to read private and intimate information of each one of the campers aloud to the entire group; sharing the personal tragedies and traumas that each character has encountered.

Barrett also explains to his campers that they are part of a game of survival, and they all have the opportunity to win $1 million. The story has now become ‘Survivor’ meets ‘The Hunger Games’ as the campers must attend therapy while avoiding a pretend killer whom will take them out of the game; while simultaneously preparing the camp for its re-opening, and still all being a part of the reality TV show whose footage will be used as a storyboard for the reboot of the “Summer Camp” film.

This is why I had to watch it twice. The story is so convoluted that it borders on making no sense whatsoever.

Besides using the ridiculous gimmick of placing cameras all over the grounds, each camper has a camera attached to their chest; the footage from which I don’t ever recall seeing. The characters are in their twenties, as is repeated in the movie several times, yet they are all portrayed as if they were teen-agers. The characters are one-note and cookie-cutter, they bring no depth or substance to the story at all. There is not one character that doesn’t fall into an obvious cliché’. The dialogue is stilted and obvious; the punch-line to any joke is easy to predict before the set-up is finished.

This movie is not scary, nor is it funny enough to be a satire or a dark comedy. To quote Julian Barrett, “That would be funny… if that were funny.” And for a movie with the tag-line: ‘Pitch Your Tent. Dig Your Grave.’ there should have been at least one tent in the movie: which there is not, since they all stay in cabins.

The only positives I have for “Camp Dread” is that it’s a good-looking cast. The men and women both aren’t bad to look at for an hour and twenty minutes. I also respect the use of practical gore effects over any computer-generated ones. The gore effects are decent enough, yet there are not enough of them for a movie of this genre. There also is a slight twist at the end of the movie, but by the time you get there it doesn’t matter. And when you fully analyze it you see how outlandish it really is.

For being the two main stars, Eric Roberts and Danielle Harris are both underutilized. Roberts could have done his scenes half-asleep and he would still be the best thing about this movie. Likewise, seeing Felissa Rose back in a “Summer Camp” setting is a nice touch of nostalgia; but all it really does is point out how good this movie is not. If you come upon this movie streaming on-line, it’s worth watching with a few friends, a bowl of popcorn and some rum; but there is no need to rush out and track a copy down. If you do watch it, though, watch it twice. That way it feels like it actually is a Danielle Harris movie. If I may suggest a better title: “Camp Dreadful!”