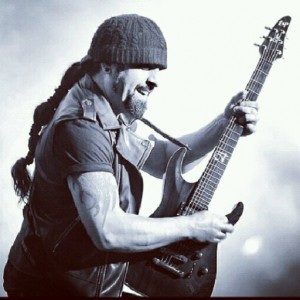 Rob Caggiano is the former lead guitarist of the thrash metal band Anthrax and current guitarist for the Danish-metal group Volbeat. The group was recently nominated for a Grammy and also put out a new music video for the song “Lonesome Rider”. Media Mikes had the pleasure of speaking with Rob about the group’s nomination, how he came to join the band and what the group has planned for the rest of this year.

Adam Lawton: Can you walk us through your transition from leaving Anthrax, to producing Volbeat and subsequently joining the band?
Rob Caggiano: I first met Volbeat around 2010. They had taken my other band The Damned Things out on tour with them. We all became friends as we hit it off instantly. The first time I really heard the band was on this tour and was just blown away. During the tour they always asked me to come up and play on the Misfits song “Angel Fuck” which was just such a blast. In talking during that tour we all flirted with the idea of working together in the studio with me as a producer. They were fans of the Damned Things album as well as the Anthrax album “Worship Music” which I produced both. It seemed like a cool idea that I was into but it all seemed a bit far-fetched because of our scheduled and the fact that I am in the States and the rest of the band is in Denmark. A few years later when I decided I needed to move on from Anthrax my scheduled had opened up and it was perfect timing because Volbeat was set to go in to the studio. They heard of what was going on with me and Michael called me up to see if I would be interested in producing their album. Things happened all really quickly because a day or two after that phone call I was in Copenhagen and about two weeks after starting work on the album I was asked if I would join the band.

AL: Did you have any reservations about joining a band that you initial only signed on to produce?
RC: I am kind of used to that as I have done that a lot lately. (Laughs) It was similar with The Damned things and Anthrax. I did have to change how I looked at the project from a production stand point because now I was not only trying to get good performances out of the band but I was also trying to figure out how I was going to put my stamp on the music. What we ended up trying worked out perfectly for the record. We put my rhythm guitars on the left and Michaels on the right we put Anders bass in the middle and Jon is everywhere. You get the sound of the band running on all cylinders.

AL: Did you have to rework your sound at all in order to fit with the new band?
RC: My sound is my sound. Coincidentally it works perfect with Volbeat. (Laughs) I really didn’t change anything. There are certainly more stack of amps on the stage now and it’s a lot louder.

AL: What were your first thoughts when your first album with band both as a producer and as a member was nominated for a Grammy?
RC: It was an honor. I have been nominated a couple times before but never was able to go to the Grammy’s. This year I went and it was surreal. It was a very cool night. I think the Grammy’s is sort of misunderstood. For me it’s not a competition of whose better or worse it’s a celebration of the most successful artists of that year. Just to be able to be in that mix for me is a honor.

AL: Can you tell us about the new video for the song “Lonesome Rider”?
RC: I think this is the first Volbeat video not to feature the band. (Laughs) That was the main idea. Michael talked to our video guy and asked him to come up with something cool that didn’t feature the band. That’s exactly what they did. I think the video turned out great and totally compliments the song.

AL: You just returned from this year’s NAMM convention. Are there any new products being released that with have your signature on them?
RC: ESP is continuing with my signature line of guitars. There aren’t any changes to this year’s model as compared to last year’s however I have been thinking about some. I love the guitar the way that it is but I have just been thinking of some stuff. The newest thing I have coming out is a signature guitar pedal. It’s going to be put about by Haden which is part of ESP now. They are originally from the UK and put out boutique amps. They are just killer! I am excited about the pedal as it’s unlike anything that is currently on the market. You should start to see more about it in the coming months.

AL: What other plans do you and the band have planned for this year?
RC: Volbeat will be back touring the States in April. We are bringing Trivium out with us and hitting a lot of B market places this time around. Our last few time out we really only hit the major markets. From there we will be heading overseas for most of the spring and summer. I also have a few other things in the pipe but I can’t talk about those just yet.