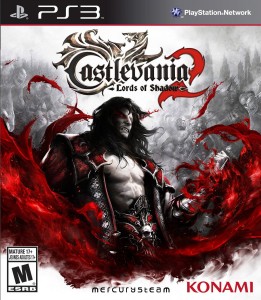 Ever since 1986, I have been a huge fan of the “Castlevania” series. I probably got introduced to it too young but it has always been a favorite. It probably also influenced my love for anything horror related. Fast forward nearly 30 years and this franchise still has some steam. In fact speaking of steam, this game is from Developer MercurySteam, who has been behind this entire “Lords of Shadow” trilogy. Don’t let the “2” in the title through you off, the trilogy also includes Nintendo 3DS title “Castlevania: Lords of Shadow – Mirror of Fate”. It is also crazy to think that this release is actually the 35th Castlevania game. Well as much as I would like to say it is the best I really can’t. It has it’s moments but overall leaves you wanting more from the closing game in the trilogy. Though if you have been following this trilogy it is worth checking out but I see this gathering dust on my shelf in a very short time and then probably ending up on eBay.

“Castlevania: Lords of Shadow 2” does some stocked with some really beautiful and very detailed areas and landscapes. I also received “The Art of Castlevania: Lords of Shadow 2” and it really made me appreciate the work that was done for this game much more. MercurySteam did a great job I might add with the visuals since this game was definitely quite a looker. The character design and development are really sharp and very in depth. In terms of game play though, I can see this game getting old after a while. The control system is interesting since you have the life stealer with the L1 button, which has a certain use and then the shield breaker with R2, so you are constantly changing and it does make things interesting. But I just felt like I was slash, slash, slashing throughout the game throughout my venture.

Official Premise: At the end of Castlevania: Lords of Shadow, the origin of Dracula and his legendary connection with the Belmonts was revealed. Castlevania: Lords of Shadow 2 is the sequel to that 2010 reboot of the Castlevania series for play on Next-Gen game consoles. In it fans can expect thrilling new twists, action, adventure and challenges, as Dracula returns, this time to battle ultimate evil. Yet the dilemma is that he himself is greatly weakened and yearning for release from his immortal bonds. To succeed against the powerful threat he stands against, the vampire lord must reacquire his old powers – and only his castle holds the key. However, the famed Belmont clan also seeks his ultimate destruction in this shocking conclusion to the Lords of Shadow series.

Since this is the last game in this new reboot of the classic Castlevania game series, I am not sure where this series will go now but MercurySteam has said that this was their last go-round with this franchise. I would say that “Castlevania: Lords of Shadow 2” is definitely worth playing, it is not terribly long but it is quite challenging in terms of difficulty. But if you are a hardcore “Castlevania” fan, this should come as no surprise. In terms of story, it is a little confusing or just short on details. But I caught on with what I could and just enjoyed the ride. Speaking of story, just a quick note, if you haven’t played the Nintendo 3DS title “Castlevania: Lords of Shadow – Mirror of Fate” and don’t want it to get spoiled, I would wait on “Lords of Shadow 2” since there’s a 10-minute cut scene that sums up the whole plot. I thought it was a nice tie-in personally of the series. I am sure that this will not be the end of “Castlevania” as like Dracula himself the series is forever. May not be my favorite game of the year but I still stand before this series.