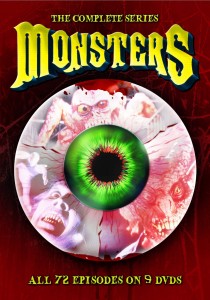 Any horror fan that grew up in the 80’s should remember the series “Monsters”, which used to play in syndication along with “Tales from the Darkside”. This anthology/horror series aired from 1988-91 with 72 half-hour episodes. This show is easily one of my favorites of all-time. No, it may not be the best but it certainly reminds me of my childhood and attributed to my love of horror today. I probably shouldn’t have been watching it at the age I did but I just couldn’t get enough of it. Luckily, thanks to Syfy and Chiller channels, this show was given a second life and has been showing over the last decade. The series has never been released on DVD EVER and thanks to eOne (who are my heroes this month), this series finally gets put out in a fantastic DVD box set.

This series delivered a great blend of horror along with comedy, sci-fi and fantasy. What I love about these episodes the most is that you are able to watch and re-watch them and they never get old. When they were re-airing on Syfy, I used to leave it on loop day after day and I couldn’t get enough. The practical effects in the film are fantastic and look great, of course not to today’s standards, but I remember I used to be quite scared of some of these show’s creations growing up, so I think it was quite effective. The show also was jam packed with an amazing cast of actors whether big stars then and big stars now. If you are reading this eOne, if you can get “Freddy’s Nightmare” complete series on DVD, I will be your best friend forever! This is must have for any horror fan, NO QUESTION!

Having watched these episodes on TV as a kid, WAY before anything called high definition was around and then re-watching them on Syfy and Chiller in the last decade, they have never been delivered in great best condition. Today these episodes on DVD are not stunning but they do the trick and personally, I think the show has never looked better. There are no additional special features included in this set. I figure that they had as much talent as they did in this show, they could have gotten at least a few interviews or commentary tracks on these episodes but nonetheless, at least we have them. The set comes with three cases, each with its own season. There is great cover art for each particular season and there is great images in case the case as well. There is no boring black case here. They aimed to impress and succeed no question.